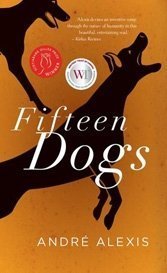 Greek gods Apollo and Hermes are wagering deities. Hanging out in a Toronto tavern, Apollo bets Hermes a year’s worth of servitude that human intelligence would burden any species. Dying happy is a myth. Hermes takes the bet. So it is that 15 dogs in a veterinary kennel are suddenly conferred with human self-consciousness. From this point on, Canadian writer Alexis revs up a ferociously intelligent array of bewitching metaphysical engines, tracking the newly conscious dogs in their individual and collective peregrinations through the human world, many dying along the way.

The survivors are meek and strong, poetic and tough, clever or stupid. They’re humans in barking guise, some gifted enough to learn human language; others transformed into students of the (sad) human condition. They seek meaning, company, hope, purpose, and above all food and shelter. They cope with human rages and their own. They indulge violence and servitude. They’re bewildered about their new state — “the unabated strangeness of the new world” — and wonder whether it’s best to remain true to feral “dog-ness” or advance to some different kind of anthropomorphic state. Questions mar answers: “How are we to live, now that we are strangers to our own kind?”

Alexis’ dog-become-human trickery belies a more profound examination of all living awareness. The wired dogs of the capricious gods — called Atticus, Benji, Prince, Majnoun, Frick and Frack, Max, Dougie — are fully formed creations called upon to fathom awareness to then reckon with morality and mortality. They’re still dogs, but thinking dogs, and their ability to think (and feel) will push them toward human-like undoing. They’re not just bullies, altruists, thugs and philosophers, but aware of these traits, which changes everything.

Atticus is a tough pack leader who secretly yearns to feel, if not to love, and learns to pray. He’s a benevolent reactionary in the making (“We must learn to be dogs again.”) Benji is a small, shrewd and submissively chirpy Judas, a “student of dominance” who nonetheless becomes aware of canine sexual mores (“It occurred to Benji that being mounted was a humiliation…”) “Quicksilver” Prince is a self-style artist who learns human speech, exiled for subverting canine language through poetry. “Sensitive and intelligent” Majnoun, Atticus’ rival and the most complex of Alexis’ creatures, is called upon to recognize that his new “intermediary” state (the dogs still bark, lick their genitals, crave masters) cannot do without the old, and that consciousness is terrifying.

The creatures in this singular novel come to life more significantly than most fictional humans because by inhabiting them as dogs, and not as converts to people, Alexis enters the world of their smells and barks and love of pissing, their adoration of “fragrant” feces as sugar plum meals. He has a preternatural empathy with canine sensory system: brackish waters, to the dogs, “reek (marvelously) of urine, fish and a thousand dirty socks.” He celebrates a separate but equal condition that human owners cannot change (one loving master must recognize Majnoun “…was not hers to improve.”) He never condescends. Godly caprices aside, if ever there was doubt that living — all creatures great and small — were stuck in the same ark, the Alexis’ dispels these doubts, adding beautiful layers of mystery, remorse and irony. Humans, Majnoun concludes, are “almost as deep as dogs, though in their own particularly way.”

The Trinidad-born Alexis has much in common with Australian David Malouf, another author capable of straddling worlds. Time stands still for these honorable dogs, as it does for a uniquely brilliant and unconventional novel likely to stand the test of time.