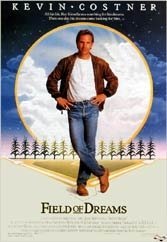 Quintessential Americana depends on optimism, idealism and redemption. Throw in baseball and you’re a card-carrying member of a club of believers. Just as 1930s movies owed their hopeful spillage to the Depression, this one trades the “greed is good” hedonism of the late 1980s for dreaming and sentimental anti-skepticism.

Ray Kinsella (Kevin Costner, made for the part) is a rookie Iowa farmer who hears a voice in his cornfield. “If you build it, he will come,” says the voice. Kinsella, a faithful Midwestern literalist (and baseball fan), eventually concludes that he’s being commanded to build a baseball diamond. Wife Annie (Amy Madigan) — the antithesis of the bunny-boiling, “Fatal Attraction” female — insists Ray be true to himself. Up goes the corny ballpark.

But nothing comes. Discouraged, maligned, bewildered and on the verge of bankruptcy, Ray sulks. Until one night ghosts of (Chicago) baseball players past begin appearing and the field’s scoreboard reveals a name — Archibald “Moonlight” Graham, a 1920s-era player. Ray joins forces with Terrance Mann (James Earl Jones), historian of baseball’s glory years, and the duo travels together to through Boston, then north to Minnesota, seeking to connect the supernatural dots.

The deeper mystery, which director Phil Alden Anderson (working from W.P. Kinsella’s novel), conceals nicely, is the identity of the “he,” which Ray has misunderstood from the start. This not only gives the story its tear-jerking climax but rounds out the redemption.

What saves an obviously hokey story from a sad fate is sincerity. Never does the story laugh at itself. Never does Costner fail to honor the earnestness necessary to pull of the stunt of believing in the unbelievable — in the manner of Robert Redford’s Roy Hobbes in “The Natural.” If Truffaut, Kurosawa and Eisenstein can be honored for their universal sensibility, then from time-to-time Hollywood deserves a nod for peddling optimism in uniquely personal ways. This is just such a sale, graceful, true and deeply touching.