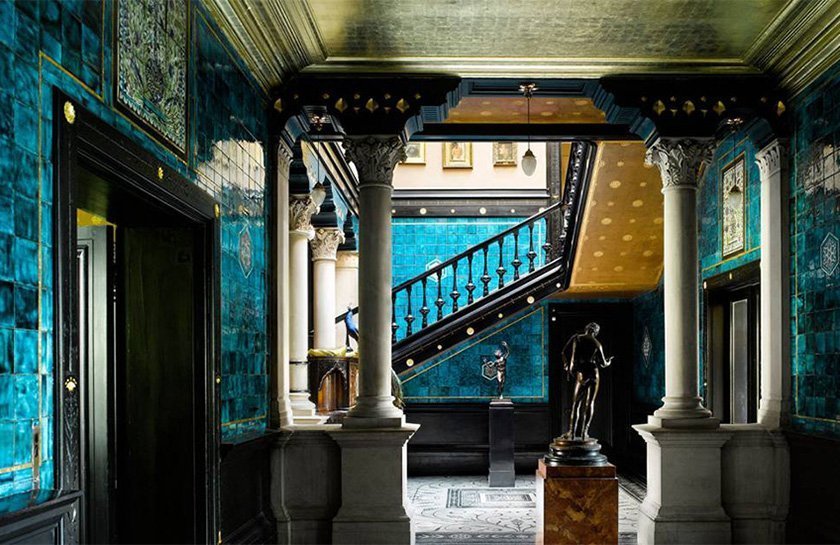 "The smirk of complicity from the Leighton House doorkeeper meant that Mona had already passed through and was inside."

Leighton House is a museum and gallery near London’s Holland Park. It is the former home and studio of the leading Victorian painter Frederick, Lord Leighton. An Arab Hall contains the artist’s huge collection of sixteenth-century Middle Eastern glazed tiles.

—From the museum guidebook

It was absurd of him to look for Mona on the small map of Holland Park posted beside the gate. Did he expect her to appear there as a question mark? That’s how he wanted to show her on the large map in his head, once he found the right place.

The Park held its own this morning. Whether the mist was trying to rise or the sunlight to descend, the result felt soft to touch, indifferent to the growl that came from Kensington High Street. He was hyper-alert but would have been just as keen passing a rank of miners’ back-to-backs or feeling his way up the dark stairway — elevator disabled, lights kaput — of a public housing high rise.

Walking, he did manage to look normal. But he never could merge with his surroundings, be they green and alive or dead and hard as cement. His step was furtive. His face twitched. The task in hand took all his attention. It was to make sure everything was in its place. That’s why city maps papered his bedroom and travel guides filled his bookcase. He couldn’t help it if the other strollers took him for a child molester or a nature fanatic.

He went up the slope past the peacock yard. The birds always had his sympathy for being as out of place in England as himself. He continued to the deer enclosure. Such brittle creatures were born to danger. They were right to keep out of the way like refugees come to West London from the wilds. He objected to an anthropomorphic view of the animal kingdom because it stopped short. Didn’t the flagstone walk and the herbaceous border also have their right to a say?

He never could merge with his surroundings, be they green and alive or dead and hard as cement.

His survey completed, he left by the discrete exit through the car park. He could honestly report now — but to whom? — that nature still nosed forward under its turf, like a peace-loving mole respecting the furniture up top. His own pace, measured in the park, sped up as he let his thoughts run on Mona. She would already be inspecting the inside of Leighton House and preheating her questions. He didn’t like questions, and Mona was all questions. But he liked Mona. For a while his way of not answering had been counter query. Now he simply tried to keep himself and the landscape from being blown over when the interrogative wind blew.

The smirk of complicity from the Leighton House doorkeeper meant that Mona had already passed through and was inside. He slowed to a museum saunter and stepped into the Arab Hall. Mona stood, ill at ease but commanding, looking into the tiny pool.

“Why are you late?” she asked.

The incised lines between her eyebrows didn’t mean she was vexed, only forever inquisitive.

“Why didn’t you let me know so I could have come with you?”

Mona was working up to speed, no longer ill at ease.

“Had you come with me, I couldn’t have looked over the park.”

He recalled having said that at least once before. Though refutable, it was nevertheless true.

“Did you think about me?”

The birds always had his sympathy for being as out of place in England as himself.

This time he knew that the truth, “yes but”, would not serve.

“I was checking out the park.”

“Stuff the park, you aren’t on their staff, are you?”

He scrambled to get something together in the way of a reply.

“You certainly did want to come into my thoughts, but I managed to keep you at arm’s length till we — I — got into Abbotsbury Road.”

“What if I strong-armed you for a spell?”

With that question Mona threw back her head. Her breasts rose.

“Now, darling,” he said, weary. “You know that no one opens every pore of his mind to another human being, even in novels, even in the olden days, even in goddamn popular songs.”

“Why are you getting huffy?” said Mona, now the good cop. “Don’t you think too many of your pores are gummed up with what could get on very well without you?”

At the time he felt it had been a mistake to tell Mona how standing in Parkhurst Road he’d watched the lights come on in Holloway Prison. But he told her all the same and now she knew. Not, however, that he’d hung around till after breakfast time to see if the sabbath was honored in the establishment with an altered routine.

“Of course everything could get on very well without me. But I couldn’t get on at all without it.”

“Why are we standing?” asked Mona. She hadn’t listened but appeared mollified all the same.

She sat down on the bench, pulling her underpants loose through her skirt while thinking of the next question.

Sitting beside her, he gently closed her mouth with his right hand and with his left just as gently kneaded the nape of her neck. He had the impression that Mona too was happy sitting there asking nothing.

Water tinkled in the black basin, the tiles nodded peacock blue, an attendant voyeur dusted the other side of the fretted screen. Forgetting Mona warm beside him, he began his survey. The Persian ware, the Damascene window, the verse from the Koran over the door — all were in place.

Mona cocked her head as if she was going to ask something, but only sighed. Though loud as sighs go, it could hardly have caused the echo that swirled in the gilt dome overhead. He winced. It was something new and would have to be worked into his inventory.

About the Author: Peter Byrne

Chicago-native Peter Byrne now lives in Lecce, in the deep south of Italy. Grifo Press (Lecce) recently published a book containing two plays and 25 short pieces titled "Everywhere Tales," making him among the rare writer who has had work published in his native language by a foreign press. Born in 1029, he has been a writer, teacher and traveler all his life.