Fez in black and white 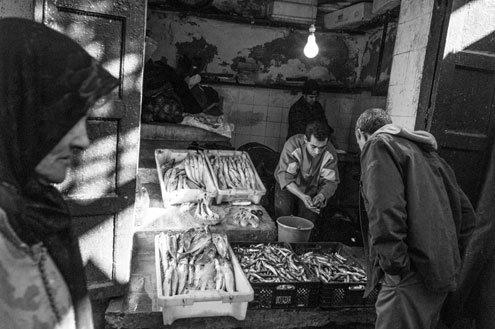 ear the entrance to Fez’s medina, on the Tala A’Kbira, feral cats cluster beneath the meat stalls begging the butcher to toss them scraps of intestines. During my six days in Morocco’s third largest city I saw my fair share animals, most chopped into every cut of meat you can possibly imagine, and some you can’t. The highlight was a camel’s head hanging from a meat hook over a narrow street, its grey tongue still lolling from its mouth, its eyes open and blank. Bumping accidentally into skinned and hanging carcasses was easy. In the early morning, dead mules lay draped over on marble counter like carpets. The butcher was busy severing their heads.

There were also chickens, alive but captive, some of them hung upside down by their tied feet. Occasionally one of the shackled birds would hunger for freedom, flapping its wings until gravity and futility forced its eyes back to the ground. Among the living were the countless street cats, which roamed near the Bab Boujloud. They seemed to me among the healthiest feral cats ever.

On the other end of the Tala A’Kbira, near the Kairaouine Mosque, was another assortment of animals both alive and dead. Old-style tanneries still operate here, and tourists can watch men make leather out of sheep or cow hides. The raw skins are piled up, thick and bloody. They smell like death and rotting. The men dip the skins in earthen vats filled with pigeon excrement (to soften) and coloring dye. They load up the dyed skins onto donkeys, drive the donkeys out to the nearby Merenid Tombs where they graze on the hill with the live sheep while the bright-red sheepskins dry in sun. To see this is at once beautiful and horrible. From a distance, the labor of the men resembled a choreographed dance to a sad, slow song; from our terrace the red skins looked like poppies.

The terrace was located in the middle of the sprawling Fez medina and afforded a panoramic view of satellite dishes clustered on roofs as well as the minarets of mosques. The satellite dishes all pointed southwest, toward the strongest TV signal, while minarets all pointed upward toward God. From the minarets, five times daily, the calls to prayer summoned the faithful in a chorus round that sounded at times like children singing “Frère Jacques,” but the actual calls came from the voices of men, deep and serious with religion. From the satellite dishes, Western TV shows and Egyptian soap operas streamed through screens, elixirs for life’s boredoms and mysteries.

Perhaps the most intriguing aspect of my stay in Fez was trying to comprehend the schizophrenic relationship between women and men. Though Morocco is a secular monarchy that won independence from France in 1956, woman lag well behind men in gender rights. The Fez women I saw were dressed in long, frumpy kaftans. Kaftans are unflattering robes that hang to the ankles revealing the hems of pajamas underneath. Both the kaftans and pajamas were often made from polar fleece. Many were brightly colored: bright blues, purples, and pinks.

Were the women who wore them, I wondered, completely avoiding the possibility of a male’s attention, as the blurring shape of their garments seemed to suggest? They covered their heads in hijab and when they left their homes they mostly did so to shop. Men and women did not mix, unless they belonged to the same family. When I sat down for mint teas at cafes, the only woman in a sea of black-haired men, I felt weighty looks coming my way.

The men wore typical winter jeans and sweaters. As in any country, I could see them following women with their eyes. They checked their cell phones and haggled for more money among visitors, seemingly disconnected from concepts of truthfulness or cheating (was cheating allowed by the Islamic faith, I asked myself, or was it just a facet of human nature left unchecked by a religion too busy checking the details of other things, like the concealing of women’s hair?). Most of the men seemed listless and bored. They loitered around shops, cafes, and in streets doing little more than talking, joking, wheedling more money than their goods were worth, and drinking mint tea.

One afternoon, while walking down a street with my father and my photographer husband Simon Griffee, Simon took a photograph of a man walking towards him. Just as he snapped it, a group of girls‚ some of them wearing hijab or kaftans, was approaching to the left of us, near enough to hear the camera’s shutter click. One turned around, smiled and laughed. She was wearing pink lipstick and had dark-painted eyes, surely thinking that Simon had taken her picture and feeling flattered by the act. For me, the pretty girl and her hope that she’d been photographed lay at the heart of Fez, a place of contrasts, confusion and everything in between.