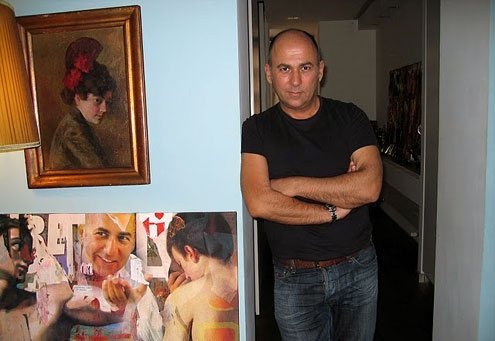 stanbul-born director Ferzan Ozpetek moved to Italy in 1976 at age 17 to study film and art history, eventually entering the film industry as an assistant director to the late comic actor Massimo Troisi. Since then, Ozpetek has evolved into one of Italy’s most consistent and prolific filmmakers, often exploring themes that mainstream Italy is reluctant to confront, including homosexuality, cultural estrangement, and the breaking down of class barriers.

In his critically-acclaimed 1997 low-budget first feature, “Hamam: il Bagno Turco” (“Steam: The Turkish Bath”), a married Roman man named Francesco reluctantly inherits an Istanbul apartment complex that includes a Turkish bath. But when Francesco (Alessandro Gassman) visits Istanbul, he’s enchanted by the Turkish capital and is gradually confronted by the reality of his own homosexuality. “The film is a love letter to the quiet joy of finding one’s place in the world,” wrote The New York Times. It cost only $300,000 to make.

Although Ozpetek now speaks accent-free Italian, he admits it took him “a bit of time” before he fully fit into his adopted homeland, despite arriving long before the wave of post-1989 immigration that has generated social and political rifts within the country. “You don’t say Billy Wilder is an Austrian director, you say [he’s] an American director,” says Ozpetek, noting the Melting Pot nature of the United States. “In Italy, I was a pioneer in many ways, culturally, with my name, and also sexually.”

The 51-year-old Ozpetek lives in a Rome apartment with his boyfriend of nine years (“He’s adorable. I call him my Oscar.”) His latest film is a family drama called “Mine Vaganti” (“Loose Cannons”), set in the southern city of Lecce. “[Ozpetek] deals with family tensions and social convention with contagious lightness and bubbly cheer,” wrote Corriere della Sera critic Paolo Mereghetti. The film received a Special Jury Prize at the Tribeca Film Festival in New York for “expertly combining family drama and farce.” In December 2009, he was honored with a personal retrospective at the city’s Museum of Modern Art, a rare tribute for a film director.

Ozpetek met with Katie McGovern. These are excerpts from their conversation.

How has Italy changed since you got here in your teens?

A lot. When I got here [in 1976], the place was dynamic. You could breathe. There was a sense of liberty, of freedom, of openness towards each other. Someone who was culturally different or dressed differently elicited curiosity. Today it produces hate. Today, people are more mentally closed, which disappoints me. These days, the Puglia region reminds me of Italy of the past; it is more open. Turkey and France also have similar closed mentalities. Whatever is different is seen as suspicious. I don’t like that.

Do you have a favorite memory of those early days, when you were trying to fit in?

I was welcomed. I didn’t come here to find a job. My father paid for me. Life was marvelous. I was troubled that I depended on my father, but I still had a beautiful first three years. I lived in Rome, Florence and Perugia.

Many of your films have scenes of the extended family eating meals together and talking. Do you like family meals?

I love having lunches and dinner with lots of people. It’s part of my life. I cook a bit of everything, usually typical Italian dishes, and not much Turkish food. I like eating food that’s typical of where I live.

Do you have a favorite among your films?

Do you have favorite movies?

Vittorio di Sica’s. I also really liked “Steel Magnolias.” I like “tea films,” where the lady of the house could have a tea watching them. You laugh, cry, and leave it behind with some kind of emotion.

You’ve mentioned intolerance and violence in other interviews, and you’ve also discussed the United States. Are you more hopeful with Barack Obama in office?

I’m very glad that Obama is in office, but just having Obama isn’t enough to change the world. Instead of being spiritual, people worship money and power. Although major religions tell you what you should and shouldn’t do, I don’t see much spirituality in how people go about it. People go to church or to the mosque, but it’s more like a chore. They don’t help each other, whether on the street or in the office. They slam doors in each other’s faces. These same people consider themselves religious because they go to the church, mosque or synagogue.

Is Italy a fair country with regard to immigration?

I’m a Turkish immigrant who has become one of the most important film directors in Italy. I’ve shown it’s possible. But the liberal and conservative media both have fueled racism. It seems like whatever happens, the blame is assigned to the foreigners. At the same time, there will be more people with foreign names who speak Italian perfectly. It’s inevitable. People have to accept this. The world is becoming more mixed.

Do you see Italy as trapped in a “Latin lover” myth?

Yes, but it’s also a Mediterranean myth, which extends to Spain, Greece, and Turkey. Strangely however, women are subtly in command in all these countries.

Do you see Turkey as eventually becoming a formal part of Europe, included in the European Union?

Turkey is going strong. If things continue as they are now, Turkey may decide they don’t want to join the EU.

What leaps to mind as the most wonderful and most depressing thing about Italy?

You tend to use some of the same actors in your films. How do you do your castings?

Once I have the screenplay, I never do auditions. I just chat with some actors. I don’t look at their previous experience. I don’t care if they’re famous or might have wide audience appeal. I’m just interested if they are right for the part.

Italian actress Margherita Buy mentioned that you hold readings of your script with the actors before filming. What sort of changes emerge from these readings?

Ten to 12 actors and the writer sit at my kitchen table and we read the screenplay together. We just read it, without acting it. From there, I correct the screenplay with the scriptwriter. Once on set, we make more changes. For me, it’s the script that has to adapt to the actors. For example, if an actor has glasses, or laughs in a certain way, or likes to play with their hair, I include that in the script. I listen to actors. They have a great sixth sense.

You are among the few Italian directors to address homosexuality in film. Why?

I think I talk about life and not about homosexuality. I think the word “homosexual” is very discriminatory. I don’t like it any more than I like the word “heterosexual.” Using these words is to define a person from below the belt, and wronging them.

I dream of a world without gay bars and places designed for gays, replaced by places for everybody. I don’t want to be defined as either homosexual or not homosexual because I don’t believe human beings should be defined by their sexuality. People have a lot of attributes.

Turkey’s minister of equal opportunity recently called homosexuality “an illness.” Some people were upset by this comment and asked me what I thought. I told them that when someone on the street says this, it’s considered normal, but when someone in a ministry says it, it’s reprehensible. It’s as if it were a problem you needed to cure such as: Take 10 aspirins for 10 days every morning before breakfast, after which you aren’t gay any more.

Would you like to direct a film in English?

I’d prefer to do a film completely in Turkish.

Would you ever want to direct a TV show?

Yes, something like “Six Feet Under” or “Desperate Housewives.” But I actually try to avoid TV. Maybe in 10 years, when I’m older.

What other forms of art do you enjoy and follow?

Painting. I painted for a while. For a year, I actually sold art. I really like Francis Bacon, Antonello da Messina, and Sebastiano del Piombo. I just bought a painting from Taner Ceylan, a Turkish painter. I enjoy art and cooking.

How do you like to spend your free time?

Going out with my friends, going to Campo de’ Fiori and having a drink, or sitting at the café next to my apartment. In general, I like staying at home and being lazy.

Have your friendships changed as you’ve become more well-known?

In Italy, I’ve had the same friends for the past 35 years.

What do you do between movies?

I live. I’m curious about things. I take the bus, the metro; I like it. Sometimes people recognize me and stop to talk. It doesn’t bother me. A director has to have contact with people. I have a lot of fun waiting in line at the post office — you see a lot of both nice things and unpleasant ones. That’s how you can understand Italy: by taking the metro, the bus, waiting in line. Italian politicians never do this, which is why they don’t understand their country. If you forced politicians to do these kinds of things, their attitudes would change.

What advice would you give aspiring directors?

Never give up. Believe in yourself. Even if life sometimes stifles your passion, work to get it back. The most important thing in life is having passion for what you do.