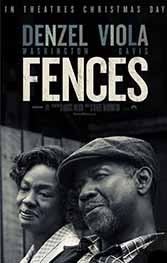 Based on the 1987 Pulitzer Prize-winning play by the late August Wilson, “Fences” derives its power from its dominant lead character, Troy Maxson (a superb Denzel Washington, who also directs). Im Pittsburgh of the 1950s, Troy is a garbage collector with a checkered past. He played in baseball’s Negro League but never made it to the Majors. Now, he spews his bitterness at life and the burdens of racism.

Washington’s larger-than-life Maxson is overweight and slouching. He alternates between charisma and menace and brooks no challenges to his behavior, values or worldview. His younger son Cory (Jovan Adepo), as tightly wound like his father, can barely restrain his anger at his father’s “tough love” (“Who says I have to like? you?” Troy tells Cory).

With one shocking exception, this overbearing father-brother-husband sees relationships and core duties as one and the same (“A man is supposed to take care of his family.”) Troy feels compelled to prepare his son to cope with the racism he faced while growing up in pre-World War II America. Holding his life together comes at great emotional cost, taking up so much physical and emotional space that few others, including his wife Rose (Viola Davis), can enter the picture. Only late in the story, when Rose finally challenges him, do her strength and pain show through.

The film’s weakness is its stage-drama feel. Washington and Davis reprise roles they played when the play was revived on Broadway in 2010. There is little in Wilson’s screenplay (written before his death in 2005) or Washington’s direction that effectively transforms fine theater into fine film. Only a few minor scenes occur beyond the backyard, where a fence sits in half-finished stasis.

Washington has called the work Shakespearian. Indeed, Troy’s fatal flaws have a Shakespearian quality. But some of Shakespeare’s plays have been successfully adapted into vibrant films. Still, “Fences” is a must-see experience for the magnificent work of Washington (above all) and Davis. Secondary characters also shine, including actor and University of Buffalo theater professor Stephen Henderson as Bono, Troy’s friend and the only one who seems to be able to talk sense to Troy, enough to make him think twice. “Some people build fences to keep people out,” Bono says of the overly obvious symbol, “and other people build fences to keep people in.”