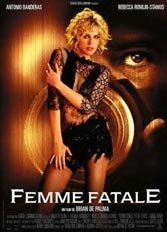 Ice cream for voyeurs, Brian De Palma’s “Bolero”-driven con-within-a-con is an exhilarating and delicious thriller that depends equally on glam, furtive glances and the shifting premises of deceit. The first 40 minutes — count’em — consist of a veteran jewel thief Laure Ash (Rebecca Romijn) doing her thing during the Cannes Film Festival — with her strategy playing out in the context of the high-stakes debauchery that is the festival itself.

As Ravel’s rhythm paces her, Laure, as amoral as she is beautiful (a menacing, strong-jawed beauty), makes off with a $10 million diamond (stolen off the neck of a gold-snake-wrapped model she stunningly pretends to seduce). She then double-crosses her equally ruthless partners “Black Tie” (Eriq Ebouaney) and Racine (Édouard Montrouge) … until De Palma turns the tables. And then, adding disappearance, reappearance, and the passage of time, turns them a third time and a fourth.

For spice and diversion, literal and otherwise, he throws in Nicholas Barto (Antonio Banderas), a Spanish photographer. It is Barto who happens to snap a photo of Ash (who by this time has apparently switched identities, becoming Lily Watts, the wife of the American ambassador to France; or has she?). When “Black Tie” by chance sees the face of his former accomplice, the cat-and-mouse game — call it dishonor among thieves — is back on. At first bewildered, Barto gradually begins peeling back the layers of the thief’s onion, drawn into an erotic doppelganger riddle that isn’t solved until the story’s last minute, if it fact it’s solved at all.

This is De Palma doing what he does best, riffing on Hitchcock to create a film that’s slick, visually provocative, sexy without overload — all while dishing out enough dreamy and impressionistic U-turns to fill a dozen narrative obstacle courses. Pure pleasure, above all because Romijin improbably holds both the eye and the pace.