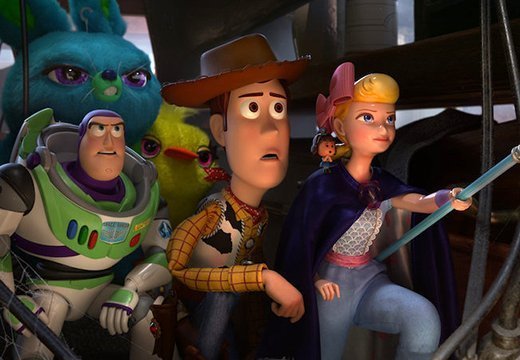 he latest installment of “Toy Story” is a romantic comedy in the classic mold, featuring Woody (Tom Hanks) as the reluctant male who needs to be persuaded to take the plunge. Indeed, the film “makes the couple” a whopping 3 times: Woody and Bo Peep (Annie Potts); Forky (Tony Hale) and (for a better word) Knifey, the “trash” twosome whose coming together as the credits roll is both unexpected and delightful, a moment of sheer cinematic bliss; and Gabby Gabby (Christina Hendricks) and the “lost girl” (Maliah Bargas-Good), another tearful moment.

Couples are best made out of tension and conflict (think of Claudette Colbert and Clark Gable in “It Happened One Night” (1934), or Katharine Hepburn and Humphrey Bogart in “The African Queen” (1951).

Much of “Toy Story 4’s” tension is provided by strong, tough women — more strong women than we’ve heretofore seen in the franchise — not all of whom are even nice. Through most of her screen time, Gabby Gabby is a nasty, manipulative, big and bossy “horror” doll, “defective out of the box,” the embittered, arguably disabled leader of a cadre of Charlie McCarthy puppets (“The Dummies,” Steve Purcell) who terrorize the antique shop where they’ve lived for years without anyone wanting them. Trixie (Kristen Schaal), who finds no mate in the film and isn’t looking for one, is nicer but authoritative, managing Bonnie’s (Madeleine McGraw) bedroom of toys like a plantation straw boss, depriving Woody of a role that was previously his in Andy’s bedroom. So even though Woody is the primary protagonist, and several new male toys are introduced, “Toy Story 4” goes beyond the addition of a female toy here and there (e.g. cowgirl Jessie in “Toy Story 2”); this is the franchise’s feminist film.

Woody is fond of Bo Beep (she’s neither “little” nor a “peep” and goes mainly by the name of “Bo” in this film), and she of him (a couple of scenes remind one of Romeo and Juliet, complete with faux balcony). But Bo’s strengths are many and threaten to overwhelm and displace Woody’s desire. She’s a fiercely independent feminist, having been “on her own,” beyond the security of a child’s bedroom, for 7 years. She’s an athlete and a warrior, using her hook as a both a weapon and climbing device, ala Spiderman. She and other independent toys travel around in a mechanical skunk, like something out of 2015’s “Mad Max: Fury Road.” These “Independent Toys,” which exist somewhere between “Lost Toys” and “Toys who have a Kid,” are a new category for the franchise.

While Bo has been off seeing the world with her band of independents, Woody has become something of a social worker, dedicated to taking care of hapless Forky and returning him to his kid and maker, Bonnie. This is a full-time job, and his devotion to it–an act of deep loyalty to Bonnie (the opposite of independence) that is grounded in Woody’s sense of humaneness–appears to separate him irrevocably from Bo’s “reality woman” sensibility and to undermine the possibility of their coming together. But of course they do. One can imagine Bo and Woody in a sequel of domesticity, on the order of “Taming of the Shrew,” though Bo isn’t quite a shrew, and Woody is no tamer.

The film has only 4 protagonists (Woody, Bo, Gabby Gabby, and Forky), yet some of the other players are notable. Buzz Lightyear (Tim Allen) returns as the none-too-bright astronaut, who believes the buttons on his chest are equivalent to the “inner voice,” the conscience, that drives and inspires Woody. (When Woody says he’s listening to his “inner voice,” Buzz’s response is “whose voice is it?”)

Buzz is joined in the dumb-male role by a new toy, the Evel Knievel-ly Canadian daredevil Duke Caboom (Keanu Reeves) who, like Buzz, lacks an inner self and is therefore easily manipulated to do all kinds of crazy stuff. In terms coined by sociologist David Riesman and used in “The Lonely Crowd,” his landmark 1950 study of the American character, Woody is “inner-directed,” Buzz and Duke “other-directed.”

The comic duo Keegan-Michael Key and Jordan Peele are the voices behind new comic plush toys Ducky and Bunny. The two imagine plenty of ways to get out of one scrape or another — all of them, hysterically, impossibly absurd. These male toys, for all their humor and pathos, also present sharp distinctions between brains and brawn, smart and clueless, leaders and followers.

Duke Caboom, Ducky and Bunny are solid and funny additions to the “Toy Story” crew, but on the whole the cast is too large and dispenses with too many familiar characters to achieve the kind of focus that shaped previous editions. The setting is a carnival with an antique store next to it, allowing the characters to end up in myriad places with flashing lights and whirring machinery —too many flashing lights and too much whirring machinery. The scenes set in the antique store in particular occupy too much of the film and have a manic quality that feels excessive.

These caveats aside, “Toy Story 4” is almost as good as its predecessors. And, given that the trilogy that preceded it is often mentioned in the same breath with the all-time great trilogies–Francis Ford Coppola’s “The Godfather” (1972, 1974 and 1990) and Krzysztof Kieslowski’s “Three Colors” (1993-94) —that’s saying something.