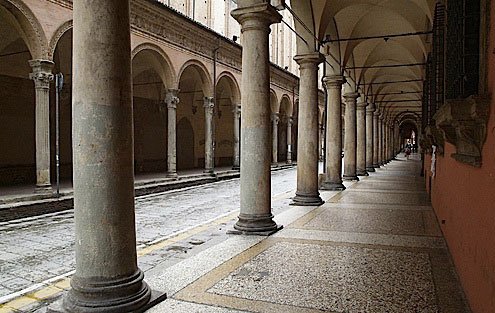 ne day over tea, my friend Bell asked about my hobbies and I told her about the day tripping I do from Milan with my husband, Dan. Excited, she said, “Go to Bologna.” I immediately checked the train schedule. Good news. Just under two hours — the perfect day-trip. Next Saturday, on the eve of my birthday, we were off.

Maybe the Bolognese knew about my birthday. A lively little street market chocked with regional delights greeted us in Piazza XX Settembre. We found speck from Alto Adige, great slabs of bread from Sicily, chocolate from Piedmont, and wine, wine, wine. All were for sale and most booths had “taste ‘ems” set out.

As we explored further, tasting and buying, the city moved into a more festive gear. A band of 12 musicians dressed in ill-fitting red uniforms assembled and began playing. The music made us put aside their ragtag appearance, a cross between folkdance and beer hall. The piazza soon swelled with people tapping their feet and clapping.

Bologna is eclectic and surprising.

Founded by Etruscans who displaced shepherds known as “villanovians,” the city was named Felsina. Then came Roman rule and after that the Lombards. The Lombards presided over a boom: the population hit 70,000 by 1250. In the enlightened 13th-century, dynamic Bologna rivaled Venice and Paris. The progressive Legge del Paradiso all but abolished indentured servitude and based social status on income.

But two centuries of on-again, off-again plague cut into the advances, halving the population and humbling the city, which turned to Rome for help and by the 16th-century was in the orbit of Papal States. Much of Italian history, in fact, is dominated by such secular-religious cycles.

When the musicians took a break we wandered toward the center down Via dell’Indipendenza. On the way, I found the weekly market, the largest I’ve ever seen in Italy. We found funky and functional, office and outdoors, simple and sumptuous.

The sarongs at one stall got Dan’s attention. “You know, these are just the right size for our table.” Right he was, and they were much more colorful than most traditional tablecloths. No hurry, said the vendor. The market would be open all that day and into the next, Sunday, Oct. 4, as part of the San Petronius feast — he’s the fifth century archbishop who is Bologna’s patron saint.

But our prowling had made us hungry.

“There are no bad restaurants in Bologna,” Bell had sagely told me. We took it on faith and picked the first one we liked, the Caminetto d’Oro, where the parents did the cooking and the grown kids served, offering wine suggestions from a sumptuous list (see below).

Although it was decorated with elegant simplicity (hardwood floors, bare tables set with placemats of handmade paper) the dining atmosphere was warm and welcoming. When I took a bite of bread from the basket on our table, I nodded: it was freshly baked.

After lunch we pressed on along the arcaded streets toward the center. “If I lived here,” I remarked, “I’d never need an umbrella.” That was the original idea. The arcades — 38 kilometers worth within the city limits — were imposed by law to help inhabitants walk and shop notwithstanding the weather, which can be harsh in winter and brutally hot in summer. It was mall thinking for medieval times.

We then took a tour of piazzas, beginning with Piazza Nettuno, with its imposing Neptune statue and a nymph who sprays water from her breasts, an early display of maternal deference. (Bologna was an early advocate for women’s rights, allowing them to matriculate during the Renaissance.)

Piazza Nettuno also hosts the Palazzo Comunale, where photos of Italian resistance fighters line the wall. The city was the moral epicenter of the fight against Mussolini, which also accounts for its longstanding reputation as the capital of the Italian Left. In the 1970s, the city was the jewel of the Red Belt, a group of powerful northern Italian cities that tended to support the Italian Communist Party. Writer and film director Pier Paolo Pasolini was born here, as was Olympic gold medal skier Alberto Tomba, former Foreign Minister Gianfranco Fini and Prime Minister Romano Prodi, who got his start teaching economics and industrial ethics at the university.

In August 1980, the city was hit with the worst terrorist act in Italian postwar history as neo-fascist terrorists exploded a bomb in the train station that killed 86 and injured 200 others. Many believe the act was part of a lurid plot the attackers hoped would be blamed on the Communists, discrediting the party. A wing of the station was rebuilt and a plaque honors the names of the dead.

Continuing with piazzas, we get to Piazza Maggiore and the Basilica San Petronio, the fifth largest basilica in the world. Its designers wanted to make it larger even than St. Peter’s (the ancient church, not the new one), but the pope nixed the idea, saying no church should challenge the achitectural primacy of Rome’s religious monuments. Begun in 1390, the façade remains unfinished seven centuries later. Architect Andrea Palladio submitted a final façade plan in the 16th-century but city politics and assorted squabbling sunk all efforts. Talk about Italian delays. Since San Petronio belonged to the comune, not the archdiocese, the basilica wasn’t even consecrated until 1954.

Any city where Dante once studied and that can’t finish a basilica in 650 years must have another quirk, right? You bet.

Bologna is basketball crazy. It’s the only major city in Italy where fans are as interested in basketball as soccer. NBA star Dominique Wilkins played here, so did Tyus Edney, Manu Ginobli, former NBA No. 1 pick Michael Olowakandi, and Nunzio Stallone (no relation to Sylvester), an Italo-American who joined one of the city’s two teams in the 1930s.

But Bologna’s most enduring legacy is education. Bologna’s university, founded in 1088, is Europe’s oldest. Its enrollment lists read like a Who’s Who of Western science and literature. Petrarch and Guglielmo Marconi are alumni, as of course is Dante. The part of the basilica that faces Via dell’Archiginnasio housed the university itself, the Archiginnasio, and is now its library. University facilities are scattered around town.

Near the Palazzo Comunale is Palazzo del Re Enzo, named for Enzo, king of Sicily who spent 20 years in confinement here. You’ll also find the Palazzo del Podestà and its acoustic marvel, a whispering gallery.

The city grew on us and we decided to stay the night. We found a hotel, checked in without so much as a change of underwear, and by evening watched the fireworks. So I celebrated my birthday in Bologna, and I’d gladly do it again.

Caminetto d’Oro is owned and operated by the Carati family. The parents run the kitchen, combining solid local tradition with creative flair. Their grown children host and serve in a simple but warm and elegant atmosphere. For a typical Bolognese dish, try the tortellini in brodo or the tagliatelle al ragù. Closed Tuesday night and Wednesday. €46 a head, excluding wine. Major credit cards. Via Falegnami, 4. Tel. 05.126.3494.