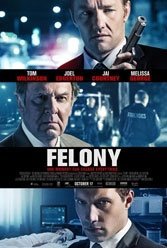 In director Matthew Saville stylishly intelligent cover-up thriller, Joel Edgerton (who wrote the script) is Malcolm “Mal” Toohey, a Sydney drug detective who’s first introduced during a successful bust in which he takes a bullet to his vest. The putative hero celebrates with his mates but drives home drunk — and something goes badly wrong. The result is a nine-year-old Indian boy in a coma. Enter veteran detective Carl Summer (Tom Wilkinson) and his young partner (Jai Courtney), the former eager to diminish what’s happened and adjust the truth, the latter a digger who senses the details of the accident don’t add up.

Here’s the atypical confluence-of-events cop movie that doesn’t require excessive action or gunplay, focusing instead on three characters — Carl, Jim, Mal — trying to handle the same situation, but with different goals in mind. Entanglements pile up and overlap. Carl wants to protect his own (“the band needs to sing together…”); Jim wants the truth (for a reason); Mal, a baby-faced family man, is caught in web he’s agreed to enter. Any cover-up is a contagion of a sort, at once infecting both the involved and reluctant, and Saville’s pacing reflects it spread. “Prison is for pricks who don’t have their punishment up here,” Carl tells Mal, pointing to his brain. But sometimes punishment is incurable. The events, cadence and tone of the last (and revealing) 15 minutes are impressive, as is the kicker.

Wilkinson is top-notch as always, but so are Edgerton and Courtney, each one highly credible and true to their characters’ tone.