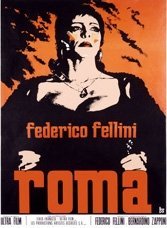 Fellini’s first-person ode to Rome is a prowling hodgepodge of haunting anecdotes. Consider the documentary-style probing of the then under-construction Rome subway. Or visions of an otherworldly cocktail party that stirs cardinals, hedonists, and members of the black aristocracy into the same salon porridge. Or Gore Vidal toasting his way through a celebratory cameo. It’s a Gothic exploration of a dubiously Christian town. The star is the city and the city is a glamour queen with a dirty mouth.

What’s most striking — since Fellini filmed in 1970 — is the Rome’s energy, and Fellini’s: The movie views like re-enacted Futurism fermented for the second half of the century. And only Fellini would manage to include a backhanded punk homage to the raccordo anulare, Rome’s sullen ring road, an asphalt tone poem that ends the film.

But beneath the city’s surreal bustle is a portrait of a self-involved capital going nowhere fast. Which is the way Fellini liked it. Between the 1950s and 1970s he wonderfully dispensed with the Copernican solar system, instead putting Rome at the center of all things sacred and profane.