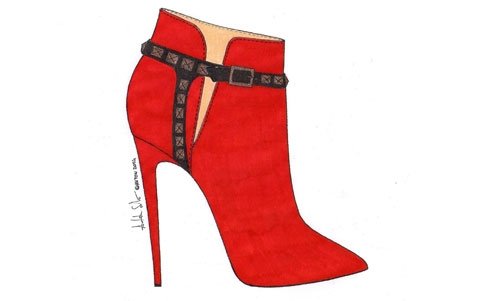 o me, these days, Italy feels so full of possibility, like a pair of red shoes calling out to be worn and paraded about.

This may be because after boldly resigning from what many considered a dream job I landed a part-time lecturer position and a consultancy role doing what I love. Or maybe it’s the weather — these late summer days when the air is breezy and breathable, when the sun adds the final flavor to grapes, and when the tourists start to leave town. Or maybe it’s because, after more than a month of recovery from a broken back, I’ve finally been cleared to get in my car and return to scooting around town. Then again, this lightness may well stem from the fact that my translation partner and I finally completed translating a very long novel and it now rests safely in the hands of its British editor.

When I think back a few weeks, I recall despair. The daily barrage of bad news on the television had sunk my hopes and made me believe we were on the cusp of something worse than usual. I was stuck at home. Topping it off, every night between midnight and 2 a.m. a neighboring farmer set off firecrackers in his fields to scare boar away from his crops. My nerves were shot.

Then, coming out of the blue and dispelling the blues, I got two very wonderful gifts. A friend and outdoorsman brought me a basket of porcini mushrooms (I was touched that he gave some to me instead of taking them all home to his large family). His kindness fed my soul. A few days later, I had a visit from a Romanian friend who works as a prep cook in a restaurant in Cortona. Her son, who obsessively designs shoes, had named one of his creations after me. The shoe drawing gave me inspiration and a kick in the pants.

Silvio Anton is only 16 but already has more than 500 completed sketches, most of them high-heeled women’s shoes. His work demonstrates technique, imagination, taste, and flair. He names each model and signs every drawing.

“Shoes are my life,” Silvio says confidently. His mother speaks of his work with quizzical joy: “All he thinks about are shoes!” His friends adore his style and I like his verve.

I started wondering if there are many kids in Italy like Silvio. If so, we should take notice of them. It feels good bask in their creative sunlight. I’m encouraged to see his new models on Facebook. I want him to earn the recognition he deserves so he can develop his talent, break into the world of fashion, and continue doing what he loves. All that will take serious muscle. Muscle that we, as adults, have built up through experience and that we mustn’t let atrophy.

I wonder if Silvio will become part of the Italian “brain drain.” What if the Made in Italy label is purely an illusion? Will he abandon hope? Italian options are limited and the country’s bureaucracy makes things Kafkaesque.

Still, I persist in believing that people can get ahead on passion, chutzpah, and gumption. I’d like to see young Silvio as an Italian Horatio Alger, pulling himself up by bootstraps of his own design.

I’m sure there’s a long German word that expresses my hopefulness. A word that means “I am feeling strong for you although I know things are tough, and I want you to feel it, too” and that’s the opposite of Schadenfreude, which is all about woe. This imagined word has Latin roots and the music of Italian. It expresses the joy of finding wild mushrooms in early fall and sharing them with a friend. It’s the feeling of red shoes.