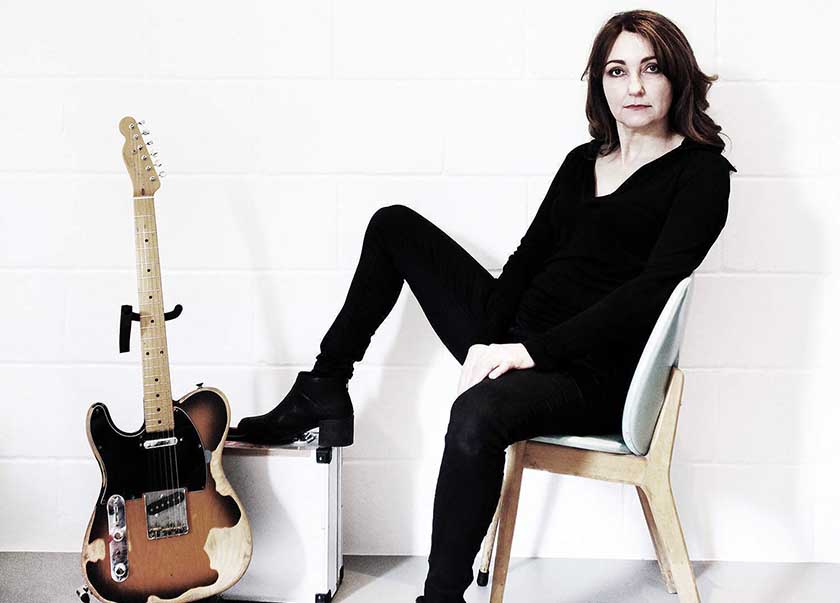 The Slits guitarist Viv Albertine: A late century life of highs and lows.
I

was very near the end of Viv Albertine’s wonderful memoir about the British punk scene and its aftermath, “Clothes, Clothes, Clothes. Music, Music, Music. Boys, Boys, Boys.”, marveling at the bluntly honest way she recounted the ups and downs of her life (professional, personal, and medical) much of it spent as the guitarist for “The Slits,” active from the mid-1970s to early 80s.

I turned to the final chapter, titled “Orange,” when this line caught my attention: “I seem to have run in a great circle, and met myself again at the starting line.”

It’s actually a quote from English writer Jeanette Winterson’s 1985 “Oranges are not the Only Fruit,” a raw recollection of her teen years.

Albertine likens her life to traveling around an orange. She begins at the bottom, gaining confidence as she climbs up the side, occasionally hanging upside down as she hits snags. When she reaches the top, she tumbles over and starts the descent, her journey accelerating as she’s drawn to people and behavior reminiscent of her hard past.

It isn’t a perfect metaphor but it captures the struggle we all go through, and the way familiar themes and certain kinds of people keep returning to our lives.

I can relate. I’ve literally found myself back where I started, encountered the same people I knew many years before, but now we’re all older and more lived in our skin, braced with present day responsibilities and more burdened by the past — which stretches out behind us a lot further than the road ahead.

Journeys are both physical and metaphysical. We travel to expand our understanding of the world, and of our fellow human beings, to experience different cultures, see the things we’ve always heard about. It’s all about gaining new perspective.

Illness is a journey of sorts, and Albertine’s memoir delves deeply into mileage marred by her own health woes. Miscarriages above all. Years of on and off in vitro fertilization finally lead to a pregnancy. She is then diagnosed with cancer shortly after giving birth. All this changes you, which she makes clear.

Albertine likens her life to traveling around an orange.

I’ve seen the transformation in my friends who have had cancer, fought it, and earned a reprieve. One was subjected to medically induced menopause to combat her breast cancer. It worked but extracted a cutting physical toll.

But it also transformed her into a strong, outspoken advocate for women’s health.

My girlfriend has dealt with MS and leukemia while raising three children and pursuing a legal career. Reading Albertine’s book helped me understand her journey better, seeing it from the perspective of someone I was not emotionally invested in.

Illness touches us all. Even the healthy among us have relatives and friends who have been through hell, racked up medical bills, sunk into depression, strained family relationships.

For three years, my own family endured a painful and difficult journey with my father, who nearly died on the operating table five years ago during surgery to have a heart valve replaced. He was technically dead for a minute or two while they repaired his crumbling aortic valve with surgical webbing and whatever else was on hand.

All this happened while I was in France, visiting my uncle after being laid off from my job covering the Florida Legislature for the “Tampa Tribune.” I came home to find my father in an extended rehabilitation hospital, barely aware of his surroundings as he recovered from the life-saving surgery.

It would take months for him to leave the hospital, months more recuperating in my sister’s house before going home to his wife, unable to walk without a walker, still struggling to regain his power of speech and hand dexterity. It was emotionally draining for all of us.

The hardest part was dealing with his emotional state. Dad felt like such a failure for being sick, for not dying on the operating table. He felt useless.

All he could think of doing was getting his wife moved from their beautiful condo in South Florida to a new home in South Carolina so she would be closer to her daughter after he died.

They listed their condo. We packed all but their essential belongings, and put them in storage. We consulted with them on the houses they found online that were for sale.

Eventually, they sold the condo and bought a nice two-story house not far from Greenville. All the kids pitched in to help them load up a van and share the driving on that 670-mile trip.

They moved in, and four days later my father suffered a stroke while sitting on their new back porch.

They moved in and felt well situated when four days later my father suffered a stroke while sitting on their new back porch. By the time the ambulance got him to the hospital he was all but dead. Barb, his wife, decided to keep him on life support until we kids could come to see him one last time before we decided to pull the plug.

It didn’t take long once the respirator was disconnected. I held his hand, surrounded by family as he breathed his last breath. It was an intense but cathartic moment. We all cried.

That was August 2018, more than two years after his near death on the operating table. Two more years than we thought we were going to have with him. Two more years for which we are all so grateful.

This month, my dad would have turned 87.

It’s been nearly three years since he died but the journey doesn’t end after death, not for the living, anyway. Since his death, we’ve all carried on with our own lives, continuing our own journeys. My sister bought a house, buried her oldest son and started a new business.

My brother finished building his cabin near Lake Lure. Switched companies. His wife took up painting again and submitted her work to art exhibitions. My nephew got divorced.

Everyone gets older. Milestones observed. Kids graduate. Couples marry. And we bury our dead.

We keep running in a full circle, meeting ourselves all over again at the beginning.