Feed it and weep 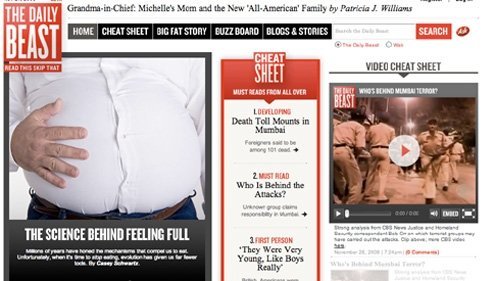 The Daily Beast wants to be a tabloid legend.
A

More and more we get our attitudes and news from online sources. Best know what we’re reading.

BEAST CLAIMS to be “liberal” counterpart to right-wing ether features like The Drudge Report. Unsaid, but clear, Beast’s heavily financed debut is also challenge to Arianna Huffington’s staggering success with The Huffington Post.com. With Tina Brown at the helm, and a sophisticated home page, Beast promises the world and sixpence.

What it actually delivers as “news,” however, is a very lean scope out of the past 24 hours. Articles and editorials selected and heavily opinion-commented by Brown and staff. Ok, we all know: rival HuffPo also plays the news on slant. And dabbles in condescending sarcasm. But Tina’s crew goes a further mile. Focusing less on the news event and more on its personalities, The Beast too often, and unpleasantly, shuffles from slavish admiration to snide sniping.

This became overclear from weeks one and two, with The Beast’s early postings: on Obama, McCain, Palin, the Clintons.

Bet you wondered why someone with Brown’s track record waited so long to join the online competition. Chance? No way. Her Oct. 6, 2008 web debut cleverly coincided with closing month to the presidential elections. When web searches hit peak records. There were big names to highlight — and play with.

Here’s T.B comparing Obama and Bill Clinton. Editorial title? “Big Dog and the Whippet.” Seems “Obama (the whippet) is a lounge singer watching from the wings of Caesar’s Palace as Elvis Presley (aka Bill C/Big Dog) rings down the house.”

Catchy word-pic, though, isn’t it? Even memorable. Maybe a little nasty. But what’s truth when you’re busy fawning over the Clintons? Who happen to be the subject of your authorized, upcoming book.

Listen to Brown’s headline gift to Sarah Palin-a subject who’s likely to remain long term item. “Sarah the Braniac.” The “Brainiac?” Well, anything goes when you’re publishing a first person discovery of the “too-little-known Sarah.” Written, by chance, by that vice presidential candidate’s own press staff. What are we supposed to think about the news-value here? One thought: doubtless Sarah’s future ascension could also use an authorized, idolizing book.

So why does Brown’s self-serving enterprise continue to get so many hits?

REASON ONE: The Beast offers a full range of topic hyperlinks to prestige publications. A guide to help us flog through the reporting clutter, print and non.

Plus: a “Feed the Beast” section invites interaction through video and blog submissions. (With better acceptance chance than a Huff send-in.) And though the urge to talk back to web writers is nearly incomprehensible for this reader, the offer is proven tool for garnering audience. Brown understands that. At 24 she was already a London Times reporter. She went on to edit and editorialize print mags Tattler, The New Yorker, Vanity Fair and Talk. Not always in the black. But print magazines are losing across the board. In general, Brown kept ahead of the curve. She’s been a topic-packager with keen talent for identifying market slice.

Here we get to REASON TWO: Aside from the many users attracted to its hyperlinks, The Beast actually has devoted readers! For Brown bites “the human side” of the news. Each entry tackles high-profile events through their performers. Stripped of their global impact. Reduced to good-as-gossip fodder. In quick, slick prose, The Beast chews on fact and spits it out as titillating peep show.

We might have guessed what was coming when we read Brown’s Oct. 6 product-introduction statement: “Curated news aggregation plus original reporting and opinion.” Curated, it is. And more opinion than news.

And yet… aren’t we already stuck with masses of human interest babble in what pass for our “better” press? How many times will we learn about the new White House Puppy? And learn it from The NYT, the Washington Post, and The Guardian. Didn’t Obama wryly comment that it was the puppy who received max comments on his website following the Acceptance Speech?

You gets what you pays for. And you gets what you asks for. The Beast already has a homunculus readership. Incredible? REMEMBER FLANNERY O’CONNOR, who said: Reader preference is a question of taste-good taste and bad taste.

So give it a book mark. As sleek search tool.