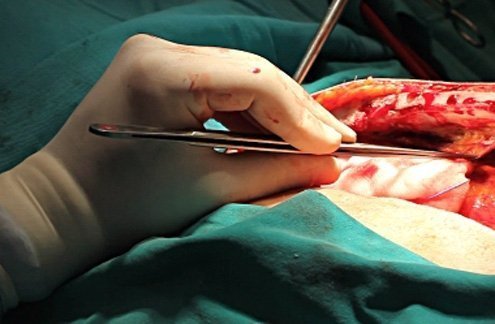 You're a doctor, I thought to myself, "you should treat someone if they need your help."
Y

ou want me to put my hand where? In whom? It was a few months into my first semester of medical school, and I had been assigned to spend an afternoon in an OB/GYN clinic. I was expecting to practice taking medical histories, querying patients about pelvic pain or abnormal menstruation. I was not expecting to put my hand in a woman’s vagina. Especially the vagina of a woman infected with HIV.

But as the medical resident calmly stepped away from the foot of the exam table and motioned for me to take her place, I reminded myself that venturing out of your comfort zone is part of what medicine is all about. So I snapped on a pair of light gray nitrile gloves, ready to feel my first uterus.

For a petrified moment, I stood with the woman’s spread legs in front of me, thinking: What if I stick my fingers somewhere they shouldn’t go? The thought evaporated as I recognized the concern as irrational fear. I reassured myself that I had taken anatomy. As a woman, I also knew this anatomy personally. (Though I was certainly approaching it from a different angle than the one I was used to.)

I did the exam. I had felt a uterus in a cadaver, but touching one in a living person bordered on the magical: Anatomy in action.

Yet the woman’s HIV-positive status bothered me. And it bothered me that it bothered me. I had studied the pathogenesis of AIDS. I knew its transmission method better than the average person. Transmission required vulnerability on the incoming end — broken skin, for example. If my gloves remained intact I was out of harm’s way. I understood this clearly. But a deeper part of me remained afraid, and I was ashamed of being afraid because I recognized the irrationality of the fear.

“Ironic,” I thought to myself. Just a few weeks ago, I had been reading a book on the HIV/AIDS epidemic written by a faculty member at my medical school. She began working in the field in the 1990s, when much about the disease was still a mystery and doctors could do little more than ensure infected patients live out their dying days more comfortably. Now, thankfully, new drug regimens, if taken appropriately, can keep the virus at bay for years.

What struck me about the book was how cruel some doctors were to patients with HIV or AIDS in those early days. The author told of doctors who shunned those patients, even hospitals that avoided treating them. She recalled a surgeon who refused to perform a procedure on a patient for fear of contracting the virus.

Early on, there was little information about how the virus was transmitted. When basketball star Magic Johnson was diagnosed as HIV positive in 1991, some players refused to share the same court with him. In 1993, Hollywood jumped into the fray, making “Philadelphia,” a movie about a gay lawyer ostracized for having the disease, and how he got it. Hysteria swirled when some suggested it might even be airborne.

In spite of all that, the idea that a surgeon would refuse to operate upset me. “You’re a doctor,” I thought to myself, “you should treat someone if they need your help.”

Yet here I was, still afraid.

I struggled to understand my hesitation. I was raised in a multicultural environment (including attending a church where I was in the racial minority). I had spent significant time in South America and working as a medical translator. I didn’t think I had suddenly developed some sort of prejudice or bias.

It took me time to realize that I simply hadn’t quite come to terms with the fact that where I’m going — into the world of medicine — is hazardous territory and always will be. There’s HIV, hepatitis, tuberculosis, and any number of other infectious diseases. Contracting them as a doctor is extremely rare. More common risks — like getting the cold or the flu — are fairly benign, though they exist. There are other, more personal dangers: burnout, depression, which can lead to suicide.

My sense is that most college students overlook the fundamentally risky nature of medicine when they consider it as a career. Guidance counselors don’t make it a point to emphasize peril. Risk isn’t covered in the pre-medical curriculum. But doctors confront it daily.

There’s a balance to be achieved with respect to these physical and emotional risks: a mix of vigilance and acceptance. The vigilance must exist without fixation; the acceptance without indifference. Experienced physicians know how to walk that line. I’m still trying to find it. But knowing that I must find it seems to me a good first step.