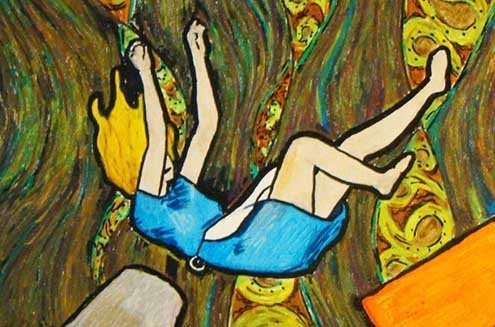 rain travel can have its advantages in country with a dubious highway network, like Italy. Trains seem like an intelligent and comfortable alternative to navigating the country by car.

I’m on the high-speed Freccia Bianca, or White Arrow, the north-south train that runs from Milan to Calabria. I boarded in the south and am now headed for Rome. My friend Daniel insisted he wanted me to attend the presentation of his third book, about the art of culinary seduction.

The train stopped n Naples and I watched people get on and off carrying suitcases, packages, sandwiches and bags. At one point a fiftyish woman tripped and fell. No one on the platform made a move to help her. She got up hastily and moved on.

When she fell she’d immediately looked around, hoping (in vain) that one had seen her tumble. She just wanted to get up and walk away as if nothing had happened.

We trip too many times to count in the course of a lifetime. Uusually, we just get up and push on.

I’ve seen all kinds of motivational posts on social media, the kind that tell you to believe in yourself no matter what, to make a comeback when you feel down, that tomorrow is another day. I have no idea who really believes this stuff. The truth is that when we fall, getting up isn’t always easy.

I know from experience. I let myself trip over social conventions I bought into when I was young. Those conventions were all about what was expected of me as a woman. For a while I wasn’t strong enough to behave like the woman in the station. I felt out of place and utterly different from the masses around me. One question kept coming up: “Am I really cut out for this world?”

I was tired. Too tired to be nice, understanding, considerate or attentive. Humanity nauseated me, aside from Giorgio. He seemed so like me when we were together but so cold and detached when we weren’t. It got so I couldn’t tell which version of him was real. I felt like saying, “Kiss me here and now. Never mind the rain. To hell with everything else! We’re here, the two of us. Nothing else matters.”

I gave him a pendant in the shape of a star, a symbolic gift.

But a few days something hit me. When had anyone done anything like that for me? When had I been on the reciving end of a romantic gesture? The answer was never.

Sure, I’d gotten bunches of presents over the years. But after a while material gifts started losing their luster. I longed for symbols, notions, reassurances and promises — the kind someone keeps. I wanted the human basics.

The train eventually dropped me off in Rome but I decided to skip the book presentation. A little later, Daniel called, which I knew he would. “Just give me one reason on earth, one, why I shouldn’t cut you out of my will?”

I thought for a second.

“Maybe because I’ll probably die before you do.”

I’d tripped and fallen and I knew it. But I wanted to dial things down.

“Okay,” he said, “I’ll leave my Rome apartment to someone else.”

I consoled myself that I wasn’t the only one who’d taken a tumble. Prime Minister Matteo Renzi’s government had just fallen. Yet young Matteo had gotten up, waved, and moved on. All in all, he was incredibly dignified.

And no doubt he’ll rebuild, his party, his ideas, himself.

Why did I find it so admirable? Because in Italy people usually don’t like admitting they’ve tripped, let alone own up to failure.

Every morning a cardinal camps out on my balcony at home to feed on the breadcrumbs I leave out. Recently a grey sparrow started making an appearance. It’s no accident.

Seasons change, governments change, the clothes and shoes in my closet change. Even I’ve changed, suddenly. I now know I can’t be content with just being satisfied. From here on in I don’t want to be doing everything on my own.

I need someone who sees and feels life in the way I do, giving it a sense of contour and texture and willing to pack it full of the same stupid, useless dreams that give meaning to my days.

I want to work on relieving the pressure I feel every waking second. I want to cut loose, close my eyes, and trust someone once and for all.

Playing lonely alien no longer works. But saying that means trying to find a kindred spirit in a sea of human faces. And who, in this world of all too human humans, would want to be with an alien?

Maybe someone who isn’t afraid of falling.