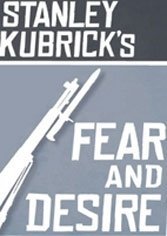 Perfectionist Stanley Kubrick successfully banished all copies of his choppy first feature until an unaccounted for print turned up more than a decade after his 2000 death. The restored hour-long “Fear and Desire,” which Kubrick produced, shot, and edited in at age 25, is an amateurishly existential musing on the pressures of war. Four soldiers trapped behind enemy lines, says the noir-styled narrator, have no country but their names. A smug, upscale lieutenant can’t control a sergeant and a private, both on the verge of different kinds of breakdowns.

Though the low-budget hindrances show, so do telling insights into Kubrick’s percolating genius. When the men attack a barracks and murder two soldiers, Kubrick pushes his camera into a wild spillage of mealtime stew to get to deeper messiness, “cold stew on a blazing island.” Sydney, the private, ordered to hold a captured woman hostage, lurches between madness and lust, which Kubrick develops through pantomime. An enemy general shot by the sergeant crawls and drools, with close-ups of his spittle tugging on the ugly. “I think we’ve all traveled too far from our own private boundaries,” says the lieutenant, later reflecting on their fate. War’s gamesmanship is “all a trick we perform when we’d rather not die immediately.”

Kubrick told an interviewer in 1966 he badly wanted to make a “poetic and meaningful film” but what came out was “very, very dull” (based on a script by Howard Sackler, who later wrote “The Great White Hope.”) “They were all terrible actors,” he said, “and I knew nothing about directing.” While there’s no arguing the downside, the “few good moments” even Kubrick agreed he’d captured provide fascinating insight into a poetic imagination just beginning to unfold.