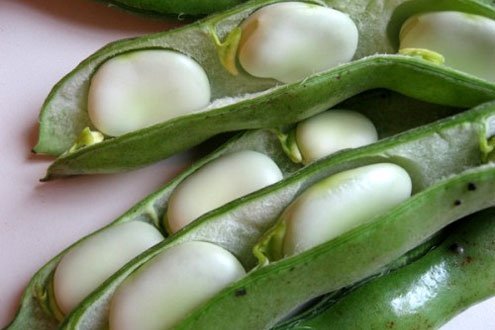 pring in Rome brings a cornucopia of local produce. It started with the royal purple carciofi romaneschi as early as the beginning of March. In April carciofi gave way to their smaller cousins, the carciofini, who came along with fresh asparagus sprouts, and now, with May in full swing, you can’t go anywhere in the Eternal City without running into Fava beans.

Call them what you want, Fava Beans, Broad Beans, Field Beans or even Bell Beans, they’re all the same: Vicia faba, which are actually a kind of pea, not a bean. One of the oldest cultivated legumes, fava beans have been a staple of the Mediterranean diet since as early as 6000 BC.

By Roman times some viewed them in mystical terms. Followers of the ancient cult of Mithras believed the hollow stalk sunk into the soil was a direct link between the underworld and the land of the living. Fava plants with their distinctive fan-like stalks appear with some frequency as a floral backdrop in Mythraic altars.

This significance, like the cult of Mithras, is largely lost to the modern world, but the beans are still a springtime favorite.

Like many of my Italian culinary discoveries I learned about them for the first time in the kitchen at Pierluigi. I’d been sent down to the basement to return a container of tomatoes and when I resurfaced Chef Antonio was at his counter with a massive stack of the floppy pods in front of him. He was happily humming away peeling the beans out of their stalks; eating one everything third pod or so.

I jumped in and started helping. Removing the seeds of a fava plant is a time-consuming task. But a skilled hand certainly helps. Antonio would run his finger down the length of each pod, deftly knocking out each bean, without cracking the shell. My shells meanwhile ended up either in four pieces or at least severely mutilated. He easily peeled two or three pods for every one of mine.

The pile of pods in between us, I asked Antonio how he prepared the beans. He gave a typically vague response accompanied by a quick hand movement, as if he were twirling a spoon in the air. That gesture seems to mean “obviously.”

That was that. Helpful.

It wasn’t until the next week I saw him prepare something that actually had the beans. He made a simple dish with tagliatelle, red onions, fava beans and a grated pecorino. If you want to make something really delicious to try the same dish with a little bit of pancetta or guanciale. A look of delight and a wafting hand in the typical smells-up-to-the-nose gesture followed the suggestion.

I haven’t tried the meaty variety yet, but the vegetarian option is delicious.

— Please feel free write to me at samalberts3@gmail.com.