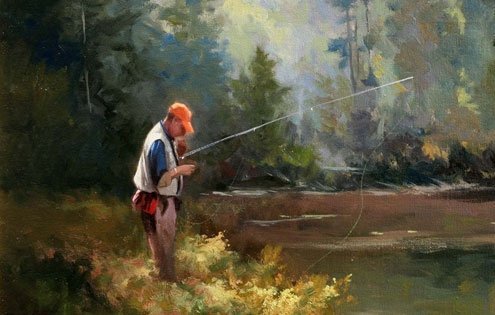 his is a story about my dad. My dad, the 60-hour-work-week entrepreneur; my dad, the fiscal conservative who used our guest bedroom to chart and study the stock market in the 1990s; my dad, who provided for my higher education with those charts; my dad, who packs a shopping cart with neat lines and right angles and who says things like “We need to leave at 7:04 a.m. to get there in time”; my dad, who proceeds to leave at 7:04 and always arrive just as the hour strikes his target time; my dad, who, when I was in second grade, founded a company for my brother and me; who made us take out loans from him, inventory our products, chart customer preference, pay back our loan, and put money toward growing our company. The profit was ours in lieu of an allowance.

These days dad can be found in dress pants, slippers and sweater, sitting straight-backed in his armchair from 7 to 10 p.m. most evenings. His face is usually hidden behind a newspaper page, a bit upturned so he can gaze through his reading glasses.

So when my sister-in-law recently found a t-shirt with “Surf City” printed across the back, she never suspected it might be the property of well-ordered, economy-minded workaholic.

Puzzled she asked, “Whose is this?”

My brother and I declared in unison, “Dad’s.”

My father is also a beach bum. Show him a watery horizon and put either a fishing rod or beer in his hand and he goes Zen in a way that eludes new-age yogi-followers. In front of water he can stand rod-straight and feet planted at shoulder-width and stare at a fixed point for the better part of the day, moving slightly to sip his beer or run his hand through his once-blonde hair.

What’s he thinking? No one’s ever thought to ask him, perhaps because the Zen master masters the art of thinking nothing.

The surf t-shirt was one of 15 my cousin made for our family vacation to Kabinakagami Lake in Ontario. We flew in on eight-seat pontoon planes, each family member carrying, besides their clothing, fishing rods and tackle, Euchre decks of playing cards, and a bottle of bourbon.

In a family full of naturalists and sportsmen, my father is the king fisherman. My cousins, brother and I grew up in my dad’s row boat, learning to split and hook worms and minnows, to put on a thick suede gardening glove and hook leeches, to read the water, and above all to be quiet. No joking or jostling. We had to focus on the point where the line met the water.

We all remember seeing him outside our cottage window filleting enough bluegill to feed a group of 20. We remember walking with him down a dirt path to check his minnow trap and bait it with Saltines. We remember him swearing under his breath when a smaller cousin hooked a big one and he scrambled to keep his rod from being dragged into the depths of the lake. We remember when he caught a 28-inch rainbow trout underneath the raft we played on, and how we all swam to the raft with trepidation the next day.

I moved to Chicago for college, then to Italy, then to Boston, while my dad got ever busier with his business. Our family sold our lakeside cottage.

It had been over a decade since I’d fished with my dad, but it all came back recently, the mental and muscle memories washing over me as I unpacked my old rod, opened up the tackle box he’s meticulously assembled for me.

“Twist the line at least eight times, through the bottom loop, then the top. Pull tight. You don’t want to lose your trophy walleye,” he said, not even looking up from his tackle, as I put a jig on my rod.

I thought about road trips with him as a child — “Can you read a map?” he’d asked me — and how my talkative mom and brother would always fall asleep, and my silent dad drove on while I silently traced my finger along our route on the Michigan Atlas.

Now we were off to a promising cove, he intently steering the boat, eyes on the horizon, I intently reading the map and signaling water features and course changes, my mom our happy foil, smiling at the birds. Once at the cove, we pulled in at a trolling speed. “What do you think?” he asked me. I told him that the map showed a deep drop-off and I thought it looked good. I let my line drop two feet and set the drag on my reel. My cast sent the jib into a suspended three-second flight that landed it with a satisfying plop a foot from shore.

“Zen,” I thought, slowly reeling in and toggling my rod. My mind was calm and quiet for four hours. Like my dad, I can enter a meditative state of mind. Liberal new age society chases after solace through meditation camps and yoga. I was instead taught from a young age by a serious-minded man with not a stitch of interest in eastern religion how to be tranquil and mindful, to be still, to watch the water, to breathe the air, to close my eyes at the sun and simply be aware of its warmth.