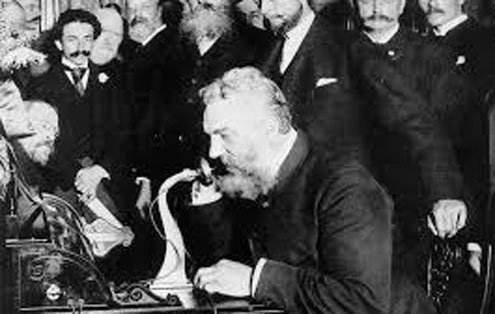 Meucci demonstrating the electrotelephone in 1860.
A

lexander Graham Bell is widely celebrated as the inventor of the telephone. In 1876, Scottish immigrant Bell filed a U.S. patent for “an apparatus for transmitting vocal sounds … telegraphically,” a breakthrough that captivated visitors to the Centennial Exhibition in Philadelphia later that year.

Less celebrated is Italian scientist, inventor and engineer Antonio Meucci (1808-1889), who some say beat Bell to the punch. It would take the U.S. House of Representatives until 2002 to formally acknowledge the Florence-born Meucci’s “extraordinary and tragic” role in one of history’s greatest inventions.

Meucci, a former mechanical and chemical engineering student at the Florence Academy of Fine Arts, improvised a primitive telephone in 1834. Employed as a theater technician at the city’s Teatro della Pergola, he rigged a makeshift acoustic device that enabled the control room to communicate with the stage.

A year later, Meucci and his wife Ester, a costume designer at the Pergola, left Florence for the Spanish province of Cuba. Both got jobs at Havana’s prestigious Grand Tacón Theater, with Meucci serving as Tacón’s chief engineer. He immediately put his inventive talents to work by devising a water purification system to purify drinking and fountain water on the property. Meucci also contributed to local industry, inventing a new method of electroplating metals that was later used by the Cuban military.

Meucci also pioneered shock treatment, which was known as electro-medicine at the time and widely administered in Europe and the Americas to treat arthritic pain. In 1848, a shock treatment session yielded a serendipitous discovery. Meucci inserted a copper wire in a patient’s mouth and then went to the adjoining room to adjust the instrumentation. When the patient screamed, Meucci was startled to hear that the copper wire had carried the reverberating sound from one room to the next.

Aware of the potential commercial implications, Meucci moved to New York in 1850 hoping to find investors willing to help him develop what he called the telegrafo parlante, “talking telegraph.” He settled on Staten Island and opened a candle factory that generated a modest income thanks to his invention of a smokeless candle.

But America would prove inhospitable. Meucci’s English was miserable, as was his entrepreneurial aptitude. He fell prey to frauds and was eventually forced into bankruptcy. His cottage was auctioned, though he was allowed to stay on.

Impoverished, Meucci nonetheless plowed ahead. In 1856, he devised the telettrofono — an electromagnetic telephone — a device that transmitted speech over vibrating electric currents. A version of it connected Meucci’s basement laboratory to Ester, confined in their second-floor bedroom with rheumatoid arthritis.

Meucci kept meticulous notebooks and diagrams, and produced more than 30 prototypes. In 1860, he organized a public demonstration, which he announced in the Italian-language newspaper, L’Eco d’Italia (though no records of the announcement remains). But backers were nowhere to be found. Prejudice against Italian immigrants deterred American investors, while Italy’s increasingly shaky political climate discouraged any help from home.

Unable to raise the $250 necessary to fully patent his design, Meucci instead paid $10 for a so-called patent caveat, an official notice of intent. He filed the “sound telegraph” caveat on Dec. 21, 1871, a full five years before Bell’s patent, and renewed it for two years. It expired in 1874, probably because Meucci didn’t have the annual $10 necessary to renew it.

Worse was to follow. In 1871, Meucci was aboard a Staten Island Ferry when its boiler exploded. The accident killed an estimated 125 people and left Meucci severely burned. Needing cash for her husband’s treatment, Ester sold every last bit of Meucci’s telettrofono materials to a second-hand dealer for $6.

But Meucci refused to give in. In 1872, he handed over the details of his caveat as well as a telettrofono to prototype to Edward B. Grant, vice president of New York’s American District Telegraph Co. (ADT), begging for a chance to demonstrate his invention on ADT lines. Grant continually put him off. In 1874, the year the caveat expired, Grant informed Meucci his materials had been lost.

Two years later, the world toasted Alexander Graham Bell. Meucci sued, but the 1886 trial was a disaster. Unable to reproduce what Ester had sold, Meucci lacked material evidence to legally prove the invention was his. The judge was William Wallace, an outspoken opponent of immigration, and Meucci’s poor English didn’t help. He lost.

The ensuing appeals process would drag on until his death in 1889. It later emerged that Bell had sealed a lucrative deal with Grant’s ADT (which later merged with Western Union), and that he may have had access to the laboratory where Meucci’s materials had gone missing.

The telephone invention controversy still rages, but the preamble of the 2002 House resolution honoring Meucci put things in sadly stark perspective: “If Meucci had been able to pay the $10 fee to maintain the caveat after 1874, no patent could have been issued to Bell.” In 1996, the city of Florence put up a plaque in front of his childhood home that reads, “The inventor of the telephone was born here.”