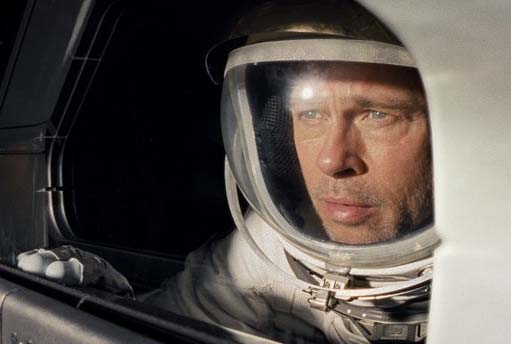 cience fiction set in the outer recesses of the solar system gives directors infinite license to break from the needs and norms of accepted realism.

Space travel imbues what might otherwise be an exercise in psychological drama with ingredients so surreal they override earthbound assumptions and all but force audiences to adhere to T.S. Eliot’s mantra about the reading of poetry — readers: suspend disbelief.

The opening sequence dwells on G-force contorted face of Roy McBride (Brad Pitt), a late 21st century astronaut who will eventually undertake a mishap-filled mission to Neptune. The esteemed McBride is a cool and disciplined man. His idiolect is one of militaristic rtigor — “I slept well, 8.2 hours, no bad dreams.” But the job he has been tasked with is anything but ordinary; by whatever means necessary, he must get to the bottom of the mystery that has all Earth scientists baffled.

Seemingly out of nowhere, Earth has been struck by a disruptive series of electrical seizures (“power surges”), that appear to be emanating from the vicinity of Neptune (shades of Jupiter’s role in Stanley Kubrick’s “2001: A Space Odyssey”). McBride’s ferocious solo effort to find the cause would fall in the rutted tradition of endlessly outbound, or marooned, space explorers, were it not for the fact that his pioneering astronaut father, Clifford McBride (Tommy Lee Jones), vanished decades ago while leading the Neptune-bound Lima Project. McBride senior and his crew have long been presumed dead.

Now, however, the elder McBride is not only believed to be alive, but is also suspected of orchestrating the surges that are putting his home planet at risk (but is it still “his” planet?).

Roy McBride’s mission, when it turns solo, is a plunge into the vicissitudes of self — his only companions are the speculations and refractions created by his own mind. It’s a mind that can be forgiven for its agitation, since somewhere out there is his father. A father who, once found, will push the story even deeper into the cosmic fantastic.

The strength of Gray’s film are Roy’s ruminations, since, in solitude, he’s given to detailed recorded accounts of his mood and feelings — the social world of Earth permits no such intimate introspection.

His personal world, it soon becomes clear, is not as skillfully managed as his spacecraft. He dislikes physical contact enough to suggest he’s ideally suited to state of being into which Gray casts him. He must reckon with his “Maker,” his father, and reckon, more symbolically, with the alien universe around him. Gray’s outland universe is defined by the effect aloneness has on the mind. McBride has no HAL9000 or “mother” computer to see him through endless days.

At heart, a father-son story with Neptune as a backdrop.

In space, no one can hear you scream — that, at least, was the mantra of “Alien.” Nor, in the case of psychic undoing, can anyone dispatch you to a therapist. You must work things out on your own, as Matt Damon did with a comic touch in “The Martian”.

But there’s nothing light or comic about Pitt’s McBride, burdened as he is by the lonely rigors of space and the father-son tripwire that lies in wait.

The universe is not just a soup of stars and planets, but a reflection of the mind of a man trying to make human ends meet. Space is stress. It challenges limits. All realism becomes subjective. Space plays havoc with time, aging, and even parental relationships.

At times, Gray lays it on too thick, as when aging officer Pruitt (Donald Sutherland), once Clifford’s friend, insists on telling Roy: “The enemy up here is not a person or a thing. It’s the endless void.”

But Roy McBride doesn’t need to be told. He may not be an omniscient narrator, but he’s certainly a Gray-made creation, human and humane. “I am unsure of the future, but I’m not concerned. I will rely on those closest to me, and I will share their burdens, as they share mine. I will live and love.” All this churning from the self-involved recesses of the mind, for which space (as imagined) creates a city.