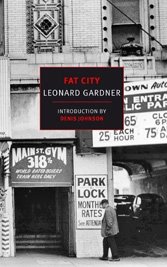 Stockton, California, early 1960s: short order cook Billy Tully is a scruffy, waylaid former boxer down on his luck and miserably woman-less: his wife left him. He’s weighing a comeback. Enter teenaged gas station attendant Ernie Munger, a decade younger, eager, with seemingly quicker fists. But he, too, has girl trouble, and the girl, pregnant, becomes a wife. Trainer Ruben Luna, a former boxer, married but burdened, tries helping one, then the other (and others). He’s compassionate but self-interested. He needs fists whose fruit help him feed his children. Yet his often-beaten fighters remind him of “the hopeless folly that was his life.”

Leonard Gardner’s slim novel — the fat city isn’t fat but neon-deprived and malnourished — is a sports noir in the best tradition of the hardboiled detective fiction that anchored the American landscape from 1930 to 1970 via Hammett, Chandler, Spillane and Ross MacDonald (with an assist from boxing writer W.C. Heinz). It’s a hero-less tale of decent losers in a dead-end, deadbeat city at a time when the options for big dumb guys were itinerant farming, booze, boxing — and marriage, as both balm and curse. There’s the Lido Gym and the Coma Hotel. There are girls, like Ernie’s Faye, that coax painfully dreamy prose: “He felt in her lips and arms a lonely employment of him.”

This is a finely toned sliver of sadness about men treading brackish water with Tully’s nowhere plunging into a particularly carnivorous abyss (“Catastrophes seemed to whisper just beyond hearing.”) Boxing can’t save him; women can’t save him; drink enrages him past the point of no return. All things abject are potent because the Stockton-born Gardner won’t let his human meat off its collective hooks; his men are those who succumb “to whatever in them is weakest.” Ruben says of his charges, “They were all so vulnerable, their duration so desperately brief.” It is a comment that eventually bathes all humankind.

The writer Denis Johnson says the novel was a muse ahead of his superlative 1992 collection of short stories, “Jesus’ Son,” whose tone, as is the case here, spews simple, savage misery. Also made into a 1972 John Huston film with Stacy Keach and Jeff Bridges.