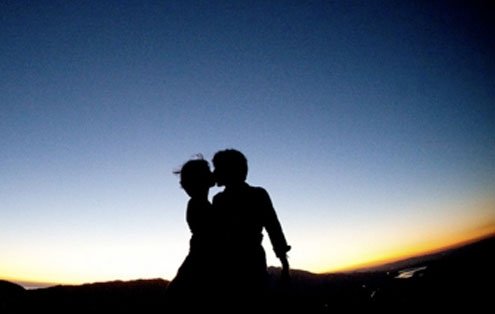 The last of the summer air...
S

ummer was on its way out when Tina took serendipity into her own hands. Night was already settling in before eight and the air was cool. Tina was anything but cool and settled. The restless heat of summer still burned inside of her and September felt too soon.

She composed a message to her friend Ally, but as she scrolled through the address book of her mobile phone, her finger paused on Alex. Alex. They had enjoyed a brief affair in the spring, mainly park-side.

They had explored and enjoyed each other amid the innocent green of New York’s largest parks. They’d shared a joint perched barefoot on a boulder and watched a red sun disappear. Tina remembered thinking that such a setting was designed for very strong feelings and she had felt something less. Even later, in his arms splayed out on his cotton sheets, sweat running down both of their backs, a part of her — the most important part — was noticeably absent.

They parted amicably soon after, with little to mourn other than a possibility. He’d wanted to stay friends. She couldn’t tell what she meant. “Friends” could mean a lot of things, but she couldn’t see where their short-lived relationship fit into any definition. Nothing inside of her pounded when they were together.

Well, something did. Objectively speaking she felt it very much, just not in the blinding and alchemic way she had desired.

Both time and desire erode the memory at a remarkable pace. On this particular already dark early evening, the thought of Alex made Tina shudder. Lying back on the sofa she extended her legs in front of her and flexed them hard. She ran a hand down her tightened inner thigh and wondered, what if?

She sent the message to Ally, as planned: Hey lady, when will you be ready?

And then she sent it to Alex. One mistaken tap of the keypad and she would have sent it anyway. What is destiny if not the impulse of the unconscious? Signs are only signs if interpreted as such.

The question opened a flirty floodgate that began with panties, flowed into a weighted exchange of the kinkiest things they’d ever done, and ended with his suggestion they add something to their list.

At which point Ally called and the two women went ahead with their plans to cook dinner together at Ally’s place. Tina was grating orange zest over salmon when her phone blinked red and vibrated on the kitchen table.

It was Alex. His rooftop had a marvelous view of the city….

She had confessed that from the list of scandalous places she’d ever made love, a rooftop was missing.

She smiled into the saucepan and added some minced ginger and a splash of Chenin Blanc.

The phone vibrated. Ally held it to her face since Tina’s hands were green and coated in chopped cilantro.

Three messages in sequence detailed exactly how he wanted it, right down to her dress pulled up high around her waist and their hands pressed up against a wall. One of his on her hip.

She felt the blood rush to her cheeks and kept stirring. Ally poured wine and set the table.

They ate and drank and shared their own exploits for a few hours, until she realized she had yet to respond to his last message.

He lived on the Upper West Side, not far from where they were now. Tina stepped out on the balcony and breathed the last of the summer air. She imagined her cheek pressed against a brick wall (or would it be plaster? Or glass even?). The wind ruffled the skirt of her dress and goose bumps emerged on her knees. Her knees! They would be naked on the wood slats of the rooftop, no soft carpet or sheets. Or would it be tar and turn her kneecaps black and send grey streaks down her shins?

She gripped the wrought iron ledge of the balcony. The cool night couldn’t keep her from burning.

She gathered her things and ran outside to catch a cab. She told Alex to grab his list, a pen, and the keys to the roof.

She watched the city fly past in the side mirrors and felt the hot leather seats on the back of her legs. She had to admit that if this would be her farewell to summer, autumn was more than welcome.