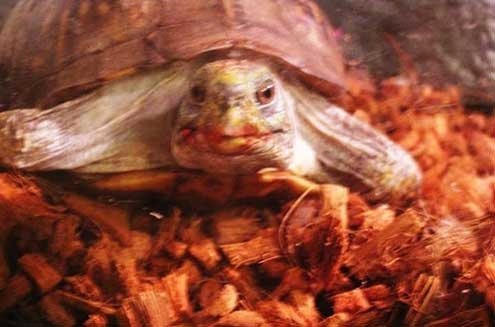 Drew, at first not recognized as a she, was named after Drew Bledsoe, the Patriots' star quarterback in those days.
M

My kind-hearted parents decided it was only right that I receive the news in the comfort of my own home. “We didn’t want to ruin your weekend,” my dad explained, his voice thick with tears.

Our family box turtle was acquired under divine circumstances. In kindergarten, Mrs. D’Agnenica (shortened to Mrs. D) informed us that Father Lolio, our Catholic School parish priest, would be arriving Monday morning for an annual blessing of the animals in honor of St. Francis of Assisi Day. I desperately wanted to be included. A dog was too much of a commitment, and cats made my mother’s eyes swell. We’d briefly had a rather large aquarium in the sitting room, an idea that was abandoned once the freshwater gourami began eating its peers, and besides, it would be risky transporting a goldfish in a bag to the blessing.

A turtle it was. A mere 24 hours later, our new pet was in Mrs. D’s classroom, receiving a generous sprinkle of holy water.

Initially, we were told that our turtle was a boy. My brother named him Drew after Drew Bledsoe, the Patriots’ star quarterback in those days. A few years later, we were informed that Drew was in fact a girl, as evidenced by the curvature of her shell. No matter — Drew was a gender-neutral name, anyway. Just look at Drew Barrymore, I thought.

Our turtle ate a balanced diet of berries and the weekly mealworm (we kept a plastic container of them in our refrigerator next to the condiments). After a dinner of raspberries, I delighted in how her beak was stained red, as if she’d applied lipstick in a fast moving car. Drew was mild-mannered, too. The only time I’d seen her angry was when she was low on vitamins and the adults had to inject her small scaly calves with a supplement-filled syringe. Her neck thrust out of its shell, amber eyes flashing, her beak clicking in a menacing way. I thought she was marvelous. I’d take her for strolls in the backyard, where she’d stride in front of me, burrowing into the dark garden dirt and foraging for insects. My sister would fill the sink with warm water and give her a quick bath before bed, sometimes scrubbing her yellow-marked shell with a toothbrush. Once, our brother brushed his teeth with it — we decided it was best not to tell him what he’d just used.

In the summer, we’d take her to our beach house rental, and I wondered if she enjoyed the sound of the ocean as much as we did. One year, we heard of a tornado warning on the news, and were told to drive far away from the coastline just in case. My mother packed us up, three kids and Drew in her travel terrarium, and we sped towards home. That night there was barely any wind, and certainly no tornado.

By the time I was eight, we had two dogs in the house, purebred cocker spaniels with exquisite bone structure and affectionate temperaments. Although we still adored Drew, the dogs could be played with and cuddled and sleep on our beds. They responded to their names. Poor Drew couldn’t compete.

In the 22 years that she was with us, I imagined her as a silent observer, the ultimate biographer of our family, if only she could write. Raised waist-high in her glass case in the thick of our home life, what hadn’t she seen, really? I was past college now — my brother was married, and Mrs. D had long retired. Father Lolio had slipped and died in an accident the year before in his own living room.

On my last trip home, I took her on as many walks as the summer humidity allowed. She gracefully stretched her neck into the gaze of the sunshine, eyes closed, a rare and valued sight. The vet told us at her recent visit that she was clearly loved but old, much older than 22. She most likely was middle-aged when we first brought her home. I found myself tiptoeing to her terrarium every night and running a finger over her shell to make sure she was okay, just in case.

I’m told Drew had a proper burial in our garden, placed in a makeshift coffin and wrapped cozily in a fleece cloth, right besides our long-deceased cocker spaniels. Her terrarium still sits in the living room, though. No one dares to move it.