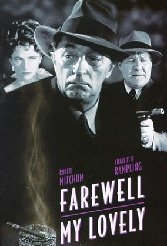 Dick Richards’ Raymond Chandler adaptation is the bittersweet distillation of Robert Mitchum’s career. His Philip Marlowe is bemused, amused and drenched in a fog of 1940s urban smoke. He’s gravel-voiced and committedly resigned to living in the netherworld (Mitchum was nearly 60 at the time). The liberties screenwriter David Zelag Goodman took with Chandler are few and in any case compensated for by Mitchum, who trawls through California murders to track down the requisite missing nightclub singer.

Charlotte Rampling, in her prime, is appropriately vampy as Helen Grayle. When Mitchum’s Marlow says “She gave me a smile I could feel in my hip pocket” you know he lives in his head, an existential detective who invents an underworld to serve his darkness.