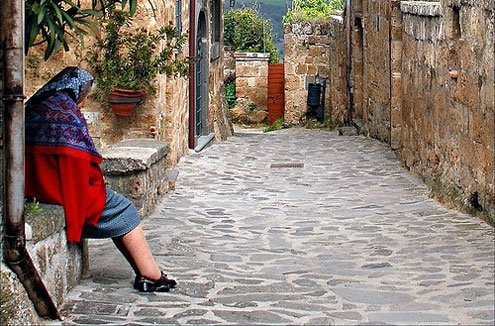 End of days.
I

n the nursing home chapel, I wait with my 93-year-old mother for the service to begin. They’ve made room for her wheelchair along the aisle. Amidst a hum of chit-chat, an energetic usher arranges other wheelchairs and walkers among the seats.

Mom tells me she’s taking a current events class. She rocks from side to side and stretches her neck the way blind people do. Yesterday she had her hair washed and puffed into a white cloud around her face, still pretty, although so lined a granddaughter once observed that there weren’t any empty spaces on it. Mom says, “The teacher repeats what I’ve already heard on the radio, but you can ask questions and there’s discussion. He passes out handouts and photocopies but I don’t take any of that stuff because I can’t see it. There are ten of us in it. It’s definitely a class. “

By now her upper body is leaning over the side of her chair. She doesn’t notice. I can barely hear her voice above the chatting congregation. She says, “On Tuesday and Friday there’s literary club. They’re reading the life story of Lillian — I forget her name. She used to sing on the ‘Lawrence Welk Show.’ On Fridays they read the biography of Billy Graham’s son, Franklin Graham. Nellie — she lives down the hall — she reads me those stories about the Amish. There’s a whole series. Those are really good.”

Her voice is happy, her face soft and sad, eyes glazed, unfocused, watery. By now her body is almost parallel to the floor. It’s Parkinson’s disease. I put my arm around her and pull her up. She leans into the hug. She says, “I go to the gym mornings and later there’s arm chair gymnastics and a hymn sing. Only on Saturday there’s not much to do but sometimes Ettie and Harriet come and we eat in the cafè. Poor things, they just sit in their house with the TV on. They don’t have classes and literary clubs like we do here.”

The minister enters. He’s a tall man, only slightly younger than his parishioners. He bellows, “Hello, ladies, how are you? Good week-end? Sure, we all had a good weekend. And you Ma’am,” he bends and addresses my mother, “How are you? Can you hear? Can she hear?”

“Are you talking to me?” she says.

“Oh yeah? Whad I say? See she can’t hear. And how are you ladies? ” The chatting dies along the rows as he approaches.

He announces that his sermon will be based on Colossians, “He is the beginning and first born of the dead.”

Mom says, “I don’t think he got that right.”

He coughs violently and prays, “Bless us gather words of Your Word.”

“He doesn’t even make sense,” she says.

We sing, “His chariots of wrath the deep thunderclouds form. And dark is His path on the wings of the storm.” All around us, voices crack and wobble. The organ emits strange dissonances. A man sitting nearby, waves one hand as though directing a choir. Another man keeps time by clicking his watch against the metal chair arm.

The minister brings to our attention Psalm 105: “When your children ask you, tell them.” In the row behind us someone’s oxygen tank is beeping. I hear snoring from across the aisle. Then Mom’s talking watch goes off. With the heel of her other hand, she manages to stop it before the rooster starts crowing. “Oh that thing!” she says, disgustedly.

When the service is over, Mom says she misses her old church, the music especially, but also the minister.

In the elevator, she tells a friend that she can’t walk or use her hands much. And she can’t see. But, apart from that, she feels great. No pain.

Later, in her room, she tells me her friend Evy died, the one who joined her for evening baseball games on TV. I’m stunned. Evy was bright and lively six months ago. Mom pats my hand, “We’re all going soon. Have to accept it.”

We talk about my father who died two years ago. She says, “It’s like he’s still here. I still talk to him.” We remember funny things he used to say and laugh hard, until tears come, dissipating sadness.

She says, “You mustn’t worry about me dear. I’m happy here. People are good to me. I only wish you weren’t so far away. Italy is so far. I feel so far from your life.” She sighs. “But there’s nothing we can do.”