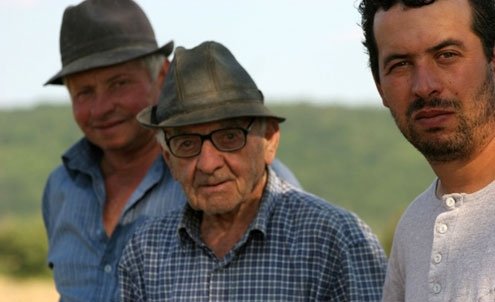 Luciano Ciolfi, right, beside his grandfather and father: All in the family.
D

riving from Milan to Tuscany’s Val D’Orcia can be stressful under normal conditions, but add bad weather and accidents — in my case a two-hour backlog outside Bologna — and a southbound road trip can turn into a nightmare. After more than six hours behind the wheel I finally stumbled into La Bandita, a farmhouse renovated as a guesthouse by American John Voigtmann and located between San Casciano Terme and Pienza, just south of Siena at the foot of mythical Monte Amiata, a thickly wooded lava dome.

I introduced myself to my Italian hosts, Simone and Marco, both busy in the kitchen, noticing that only one place has been set at the table nearest the kitchen.

“Am I the only one having dinner tonight?”

“Yes, you are,” Simone told me cheerfully. “I’m cooking for you and Marco is pouring the wine.”

On cue, Marco pulled a bottle of Ca’ Del Bosco Cuvée Prestige Franciacorta DOCG (€29) out of the fridge and poured three glasses, one for each of us. The sparkling wine, made with the classic or champagne method, is a cuvee of chardonnay (75 percent) pinot nero (15 percent) and pinot bianco (10 percent). The wine and the lively conversation with Simone and Marco took the edge off my highway battles.

Simone started us off with an artichoke risotto with Marco pouring Kellerei Cantina Terlan Winkl Alto Adige DOC 2011 (€12), a light and not too fruity sauvignon blanc “cru” made from grapes grown in a single vineyard.

Next up was roast rabbit, with Marco choosing San Carlo Rosso di Montalcino 2010 (€13). That wine’s personality impressed me so much that I went to meet with the producers the next day, a father-daughter duo, Giancarlo and Gemma Marcucci.

An ebullient and attractive thirty-something, Gemma began partnering with her father at the vineyard in 2007 after making the difficult choice to leave teaching and academia.

“I’m deeply connected to my family’s land and to the Val D’Orcia,” Gemma told me. “And I realized that the only way to stay in Montalcino was to make wine.”

The family roots run deep: Gemma’s grandfather, now 88, was an electrician by trade. He bought 13 hectares of land in 1965 and planted two-and-a-half hectares of vineyards and one of olive trees, leaving a protective ring of woods.

When I met Giancarlo, Gemma’s father, he suggested we take a walk through vineyards. They’re 350 meters up on the southwest side of Montalcino, tucked into a bowl-shaped hillside just above the confluence of two rivers. In the distance is the massive Banfi property. Thick woodlands separate the friendly, neigboring sides.

The reason he made wine, Giancarlo told me, was to “evoke emotion” in those who drink it. I told him he’d done just that with me. Before leaving, I picked up a few bottles of the San Carlo Rosso as well his 2008 San Carlo Brunello (€30).

The same day I also visited Luciano Ciolfi, whose San Lorenzo “Bramante” Brunello di Montalcino (€30) I’d tasted at a dinner several weeks earlier. Liking that wine had been a major reason for my Montalcino drive.

The San Lorenzo vineyards are also on Montalcino’s southwest slope, but higher up, at 500 meters, which means cooler temperatures and a different microclimate.

Standing in the San Lorenzo vineyard felt like standing on the prow of a great ship, the land falling away beside it. Luciano pointed to places where on clear days, the Mediterranean and even the island of Corsica are visible. Like the Marcucci family, he uses organic production methods and also has a protective ring of woods around the vineyards. He and his father are alone to work the vineyard and the cellar, except at harvest time.

After showing me around, Luciano selected a bottle of his San Lorenzo Brunello Riserva 2008, which didn’t yet have the label on it. In the best Italian tradition, he insisted the wine couldn’t be appreciated without food and invited me to a local osteria for lunch. His Brunello transformed the simple meal into an elegant feast I’ll treasure for a long time to come.