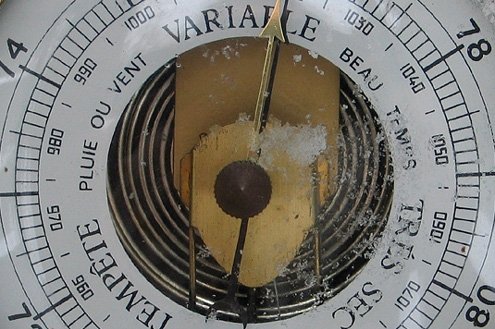 hen the thin gold needle settles between vent and variable — 75 is the number — expect sun and heat. A barometer cheats on the side of caution. Consider yourself lucky. Further over is beau and très-sec. And très-sec is a synonym for Sahara or Sahel, the sky’s dry heave registered on a rectangular dial. Never thirst for the beau. It’s a fool’s affection, a barometric Circe.

I’ve watched the barometer for decades. My father bought it — a Swiss-made Jaeger-LeCoultre — probably in the late 1940s or early 50s. He liked gadgets. He swore by the gold needle before satellites pledged to prognosticate. He kept it in his study under the bookcase.

Idling, I’d stare at the mystical machine, a propped-up gold box encased in a hard leather frame. The needle never seemed to budge, not even if you peered at it for hours. This, then, was stylish temperature: never rash, rarely sudden, deeply mature. A weather butler in a natty box.

When friends came by I’d always show off the barometer. “What’s that?” they’d ask.

The weather machine, I’d reply proudly. But what’s it do? And I’d lose my way. “It tells about the wind and the sun,” I’d say.

Some things you take on faith. You prize them without knowing how they work or why. You play the hope card. The less you know the better: Heavy water and supernovas; hieroglyphs and metastases; barometers and tender hearts.

No simple clues to what any of them mean. You can squander yourself guessing.

One night, when the barometer registered pluie ou vent, my father told my mother about the end of the world. Nuclear war was inevitable, he insisted. His eyebrows arched. The end would come from nowhere. We were all doomed.

My mother left him soon after that — 72 was the number — and the needle stuck on “ou.”

By the time I went to college I presumed the 30-year-old barometer had little left to give. I tossed it into a trunk among moth-eaten sweaters. I’d keep it as a memento. It remained there for 20 years.

Uncovered by chance 1990, it seemed no worse for wear. The day was windy and needle pointed to vent, 74.5 was the number.

By then I knew more. I knew, for example, that the narrow-band numbers equaled pressure. I knew about high pressure, low pressure, and weather systems galore. I’d been TV-prodded into the post-modern. Swirling drifts of celestial icing I knew as hurricanes; 10-mile-high linens as rain storms — satellite photos from 1,000 machines competed like vaudevillians for prime-time slots. Everyone owned their personal weather, ownership of storms.

Still, the staid barometer remained a fixture in my living room, a geriatric uncle with a knack for artificial intelligence. When clouds bunched over Frascati, north and east of me — 73 is the number — I’d know the dark dough as violent.

When August visited early, sun too blunt even for insects — 78 or 79 are the numbers — the needle would linger on the è in très. Numbers that burn.

Feel good about the return of a familiar face, the beforehand calm, and your barometer may say beau, purely out of camaraderie. It won’t admonish you. It won’t judge the slippage, or hers. That’s not its job.

It just sits there silently construing what’s ahead.

But return home rattled and things change. Heavy water and supernovas; hieroglyphs and metastases — you now know their meaning. You feel the chafing. The machine, too. It defines the storm into which you’ve ventured.

Pluie ou vent is what it says, but only for starters. Sit long enough and the needle gets blue-collar and vindictive:

The number falls to 70, rage in the dark.

This is worse than your mother’s “ou,” than your father’s doom. Rain will own the night. Flash-floods, too. Thunder may break a teapot. And a heart.

This, then, is pure low pressure. A barometer cheats on the side of caution but it doesn’t lie. By now, the two of you have a history. You’re in it together. A perfect storm is brewing.

Sixty-nine is the number, and dropping. You and your instrument, speechless and amazed.