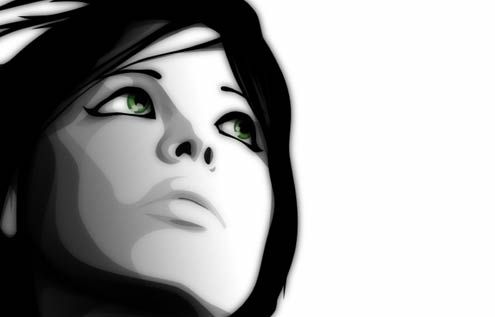 She had amazing eyes — grayish-green and round, with a cat-like glint.
C

It was a miserable, November night — not cold enough to snow, but nasty enough to require serious persuasion on Angela’s part to get us to leave the house. Reluctantly roused to promises of “I’ll buy the first round,” we piled into the car. We parked five blocks away, soaking our feet and ruining the make-up we’d so grudgingly applied. To our chagrin, the destination was not a bar, but a crowded apartment, where the food was flaccid mini pizzas and the only alcohol in sight was lukewarm spumante. Nothing good could possibly come of the evening.

Depends on who you ask…

Angela: He wasn’t the type I normally go for.

Marco: She had amazing eyes — grayish-green and round, with a cat-like glint. I saw her trying to liven up her less-than enthusiastic friends (which was a pity, because one of them was gorgeous). I liked her energy.

Angela: He was talking to his friends but looked past their faces at me — which was pretty hot. I could feel his eyes as I poured drinks — which made me nervous. I dribbled some white wine on my hand, and licked it off less subtly than I could have.

Marco: I cornered her into the pantry and told her it was the only way to speak privately. I know, it sounds lame. But I did want to talk, at least long enough to get her number.

Angela: He was chattering incessantly, and asked me for legal advice and then, of course, my number. It was a ridiculous excuse. I gave it to him anyway.

Marco: Roman girls are skilled in the art of indifference. They wait for you to do something, perpetuating their traditional passive roles. But the truth is that they are more down and dirty than we are! Sometimes I like to see how long a girl will wait before making a move, but I was flying out the next morning. I had to act fast.

Angela: He’s a flight attendant. I’m a lawyer. I felt rather modern about the whole thing. Why shouldn’t a lawyer date a flight attendant? I don’t know what it was about him that made me feel so tingly. Chemistry? Who knows? I’m sure he meets girls all the time, but he was so intense. He texted me to say goodnight. I felt like a giddy teenager.

Marco: I was away for three nights on an overseas flight to JFK. I sent her a text when we landed in Milan, just to let her know when I would be back in Rome and that I wanted to see her.

Angela: He asked me out on a date for the following Friday. I must have changed outfits 10 times! He picked me up right on time and kissed me immediately! My cheeks burned bright red. Thank god it was dark! We went to a very trendy restaurant, but when we got there, a huge table of friends was waiting.

Marco: Once a month my friends organize a big dinner. It’s always a good time, and I thought it would be fun for her to join me.

Angela: At first I felt let down. I guess was expecting a romantic first date kind of thing. Then I thought, maybe he wants me to meet his friends — that’s a good sign!

It was a bit uncomfortable when one of the girls jokingly, and rather bitchily said, “So this is the new one?”

Marco: That girl is jealous of every girl I date. We had a summer thing years ago, and she still isn’t over it. You know how intra-group dating can be.

Angela: He was really sweet about the “new one” comment. He drove me home and we talked and made out in the car for hours. I guess she’s just really jealous and possessive. You know how girls can be.

Marco: I was really tired, but I had promised to take her out just the two of us, so I ordered some takeout sushi and found some wine in the back of the fridge. It wasn’t exactly “going out,” but I figured we would end up at my place sooner or later, and I just didn’t feel like driving.

Angela: I didn’t mind going to his place. He had laid out everything on the table and opened up some really nice wine. It was so romantic! We spent the evening in, and, to be honest, he didn’t seem that tired….

Marco: We saw each other on and off for the next few months. When I wasn’t flying somewhere, it was nice to hook up.

Angela: We dated for the next few months. I fell hard!

Marco: She started calling all the time. I stopped answering. I mean, we weren’t together!

Angela: He’s an asshole. I was an idiot.

Marco: She’s a cool girl. I haven’t heard from her lately. Maybe I’ll send her a text…