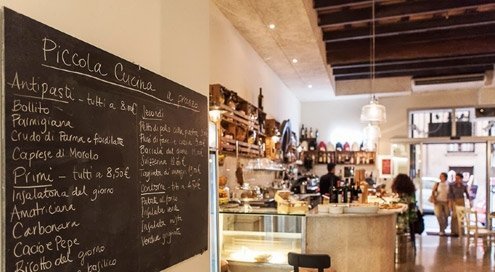 he work year starts in September. It did even before I became a parent and school schedules entered the picture.

After the hot and quiet slumber of the Italian August, normality gradually returns (most schools reopen the second week of the month). Sandy towels are washed and stowed; brown shoulders are tucked under cotton blouses; and back-to-school checklists become the norm.

But September doesn’t just mean catching up on unpaid bills and getting back to the office humdrum, at least not to me. I crave getting back into my regular dining scene groove, as well as finding new places. Writing about new and exciting Rome restaurants is a vocation I can actually look forward to.

Here’s my shortlist of interesting newly opened Rome eateries that we take a close look at as summer turns to fall.

Remember, many of these places don’t have websites (online access remains a problem in Rome) and one — Haus Garten — doesn’t take credit cards. Otherwise, put aside your pads, tablets and phones and take a chance.

La Ciambella In with the new, and one such “new” is La Ciambella, a beautifully lit and spacious bistro a stone’s throw from Piazza Navona and the Pantheon. Walking into the elegantly furnished space, the first thing you spot is the kitchen at the back, which is divided from the dining area by a large glass pane. To the left, a dome-shaped pizza oven churns out delectably authentic Neapolitan pies. The menu includes palate pleasers including a refreshing beef carpaccio variation that’s dotted with crisp celery salad, crumbled walnuts, sliced radishes and pink grapefruit. Starters include rigatoni with ‘nduja (spicy, spreadable sausage) and friggitelli (sautéed broccoli rabe), and tasty orecchiette with tomato, arugula and cacioricotta cheese. The lighter, more affordable lunch menu balances off the gourmet evening offerings. The wine list is a gem, and desserts are a must, particularly the semifreddo dribbled with ruby port and studded with caramelized strawberries. • La Ciambella Open daily from early morning to midnight. La Ciambella Via dell’Arco della Ciambella, 22; tel. 06.683.2930.

Certo I first learned about Certo when I saw a place that offered drinks in a green, outdoor setting not far from my apartment. I saw it as respite from the Roman furnace called summer. After flûtes of prosecco paired with raw shellfish from the half shell, I lingered into the evening for a taste of the exciting dinner menu, including lamb chops dredged in pistachio nuts and a caramelized version of the classic saltimbocca alla romana veal cutlet (there’s also plenty of innovative seafood). The first autumnal chill will send me racing back for the homemade zabaione gelato strewn with warm vin brulé sauce. Great wine list. • Certo. No website. Open daily, lunch and dinner. Via Nemorense, 39; tel. 06.8778.6631.

Antica Pescheria Galluzzi If you’ve ever shopped for seafood in Rome, this historic fishmonger on Via Venezia has probably come to your attention. Founded in 1894, it’s steps away from the hip Monti neighborhood and the Palazzo delle Esposizioni on Via Nazionale. It’s noted not only for its top-notch catch but its advocacy of sustainable fishery. Recently, it opened a new restaurant in the Ostiense hood called L’Antica Pescheria Il Ristorante. The place promises to be yet another fish lover’s paradise, with fresh catch twice daily from the shop’s coastal purveyors in Civitavecchia, Gallipoli, Porto Santo Stefano, Anzio, Terracina, and Gaeta. The menu is based on daily availability and the chef’s whim. But I’m a pushover: The takeaway frittura mista had me at hello. • L’Antica Pescheria Il Ristorante No website. Open daily, lunch and dinner. Via Ostiense, 56; tel. 06.5730.5081.

Rosso The Aventine Hill isn’t known for its booming restaurant scene, but Rosso is a promising new addition. Open for breakfast and throughout the day until late, Rosso is spacious 400-square meter loft that houses a restaurant, a cocktail bar, and an indoor garden. It offers a €9 lunch buffet (served to your table) as well as affordable à la carte items. The tasty snacks and tapas means you can turn aperitivi into dinner. The haute cuisine dinner menu is a bit more sophisticated, and its prices steeper. • Rosso No website. Open daily 7 a.m.-1 a.m. Viale Aventino, 32; tel. 06.6442.0656.