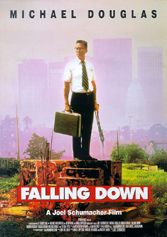 The characters that encircle Bill Foster (Michael Douglas) are peripheral to Douglas’s performance. Director Joel Schumacher’s movie is an overblown drama about a minor man (unemployed defense contractor Foster) who surrenders to rage while trapped in a Los Angeles freeway gridlock. Douglas brings a believably collapsing dimension to an otherwise hackneyed script that pretends to explain up rage’s loose ends but exploits them instead. Robert Duvall as a detective whose life is breaking apart honors the film (so, for that matter, does Tuesday Weld as his mad-as-a-hatter wife). Yet the music of this madness is Douglas’ front-and-center meltdown, which is something to behold. The rest is Hollywood icing.