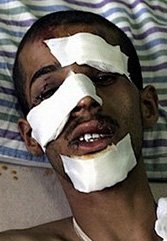 Years of pain.
I

raq is proving what it existed to prove, that you can’t have things both ways.

You can’t claim nobility of purpose in invading a nation unprovoked only to rue the inability of the invaded nation to kowtow to a version of history that suits the invaders, namely that the bells of freedom ring.

The words going around to describe American policy in Iraq three years later are stupidity and arrogance, even if, predictably, the comments are either immediately disowned or retracted.

The point is that they’re being thought. By all kinds of people.

The more persuasive, and enduring, delusion is another.

It is the linkage of cultural preeminence and force with an optimistic notion that the marriage of the two produce change. Not factored in to this amniotic dreaming is the passionate existence of the “other” nation, whether Vietnam or Iraq. It’s a seduction in which a would-be partner sees only its own wiles, prowess, and desires. It projects the rest, including a morning after.

In Vietnam, a nation of jungles, the wile and prowess belonged to the natives. First the French and then the Americans faltered and were traumatized when forced to establish their own reality in a place that refused rational transfusions. Nationalists naturally and gladly used their familiarity with terrain to discourage and demoralize intruders.

In Iraq, a place of open spaces and dirt, chaos is at home with itself. Battened down under Saddam Hussein, sectarian strife can now have its day. Radical interference from groups and nations eager to have a proxy battlefield has ensured anti-normalcy. Bastardized nationalism, while disorganized, still has a visceral calling: the nation was invaded by do-good men belonging to another faith.

The optimistic forecasts offered by both military and political leaders in Vietnam were not particularly cunning. They just reflected the conviction — held in all cases and against all odds — that the right side is entitled to win.

This is the paradoxically moral energy America brings to militarism, which would leave Romans, Huns, Crusaders, and Germans aghast. It’s hybrid militarism based (politically) on a transmission of values detached from the fight at hand.

When Vietnam proved catastrophic, President Richard Nixon coined the phrase “peace with honor,” which camouflaged what amounted to a retreat. The narcissism of sure victory (1965) demanded a new narcissism (1972) to rationalize defeat. In both scenarios, the projection of the war was on American terms, suiting America’s vision of its own place in history.

Empire bluster is natural when you’re powerful, but unsettling when your actions are resisted by many of those you seek to help.

Again, you can’t have it both ways.

You can’t invade Iraq, chase out a dictator, hail your own morning after, but assume — and assume profoundly — that the rest grows from there, like a frontier town after a shootout.

The transmission of freedom and civil liberties that is America’s most effective and noble promotional enterprise depends on accrual or affluence. If a nation is positioned — even coerced — into accruing the values of good government, or at least to admit them (India and Pakistan borrowed from England), there’s a chance, over time, that the seed will spread. If a nation is affluent, or was, there’s a chance its middle class will seek to restore that which was lost.

The defect of American dreaming, whether motivated by self-aggrandizement or the wish to stabilize a region, is its tendency to idealize. Since it hasn’t suffered a war on its own soil for 150 years, wishing for a status quo ante, a good that follows bad, comes naturally. It’s essential to the romance of American intervention: which is that it does what it does to beckon the savory inside, coaxing David from inside Michelangelo’s marble.

But when the David resists, and refusal under duress is a natural condition, the dreaming nation must reluctantly admit it that to get a sculpture you need will as well as marble. Admitting this is tantamount to admitting error, or casualness of vision, which is genetically unamerican.

As the “peace with honor” debate dominated political discussion at the end of the Vietnam war, so a similar debate is taking root now with Iraq.

These are the marble years, with not a masterpiece in sight.