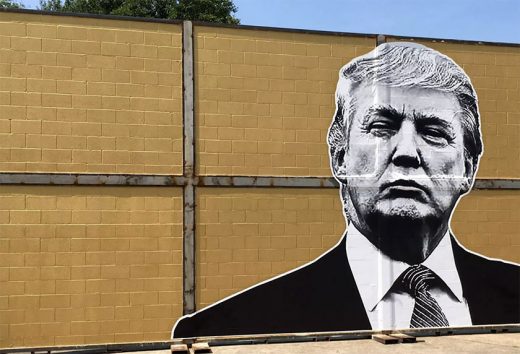 Donald Trump's idea of a border wall between the U.S. and Mexico, as well as his dim view of immigrants, has led many to installation-style artistic responses, including this one in Atlanta.
W

henever I used to tell people that I lived in Italy, the response was almost inevitable. “Oh, that’s always been my dream!” they’d say. Then they’d go off on how they’d love to quit their job and move to Tuscany.

But no one who said this ever did.

Because, you see, leaving your home is not easy, even if the reward is life under the Tuscan sun.

I have thought of this often as the United States and Italy deal with immigration controversies. Especially when people act as if migrants just waltzed up to borders and immediately got handouts.

Believe me, after being an immigrant in Italy for 30 years, I know there’s no such thing as waltzing. And when you uproot to make a life in a country that is not yours, nothing comes for free. I speak as a migrant who took the first-class route, which is called being an expatriate. As if living away from your home were just sipping champagne on the Riviera with Scott and Zelda Fitzgerald.

Uprooting and leaving your home is not easy, even if the reward is life under the Tuscan sun.

The reason that those Tuscan dreams usually go nowhere is that most of us are risk averse. It is almost impossible to swap the inertia of a satisfactory daily life for the risk of change. Migration is an extreme choice set in motion either because a new country offers something really, really good—romance or life-changing social or economic opportunity. Or the old one is really, really bad — war, poverty, violence.

Even then, most of us will choose to stay in an awful but familiar situation rather than exchange it for an unfamiliar one, even if the prospects might be better. Victims of domestic abuse often fear leaving as much as staying.

And if you do find the courage to uproot, you need the resources to do so. Emigration is costly. Travel is expensive. Legal immigration requires lawyers, fees and often an upfront financial investment in the new country. There are also costs in advance of making a move, such as acquiring the education or skills that can earn visas.

For the poor, that leaves illegal immigration, which is hardly free. Moreover, the poorer you are, the higher the relative cost. Traffickers are not cheap — and are often dishonest (and worse). The family of a Filipino woman who worked for me in Italy pooled around $7,000 to get herself to Italy illegally. Cleaning houses in Milan paid ten times as much as being a radiology technician in the Philippines.

As for so-called “free stuff,” the bureaucratic hurdles in a new country — no matter which one —can be both impenetrable and humiliating. They can be that way even if you’re legal and wealthy. Being illegal means they’re not only impenetrable and humiliating but also dangerous. When I moved to Italy, I had high-level connections and excellent lawyers. I still had to spend hours in sordid public offices, where authorities invariably handled my case before taking those of the people with brown faces. When I called them on it, they would always say, “Ah, but you are different.” Opportunity costs are high, too. All emigrants —even the poorest —leave their families, their culture and their connections behind. Again, the poorer you are, the higher these costs are relative to your resources. Leaving home inevitably means not working for a while, or working below your qualifications. Italy did not recognize my bachelor’s degree from a top American college (for regulations too complicated to explain here). Nor did the degree give me the entree or social recognition and status it would have in the U.S.

During my years in Italy, I heard the same paradoxical refrains: “Immigrants refuse to integrate! They close themselves off — with their repulsive customs —in scary ghettos!” Or the contrary: “Immigrants will kill our culture!”

Illegal immigration by sea to Italy is expensive, fraught with peril, and fails as often as it succeeds.

As the “Economist” recently pointed out, and I learned raising children in Italy, transmitting a parent’s original language (even English) to the next generation is very hard. In Milan, the children at Filipino Sunday picnics in the park played soccer in Milan football t-shirts and had Milanese accents. American lawyer Alan Dershowitz has said the biggest threat to Judaism is not the destruction of Israel but assimilation in America.

In fact, assimilation is so stealthy and easy, that it ranks among the leading reasons why immigrants cluster in neighborhoods and insist on their identity. Italian visitors to America’s various Little Italys always laughed that Italian-Americans, long anchored in the U.S., behaved in more caricatured Italian ways than Italians themselves.

Finally, my years as an immigrant —expatriate — in Italy taught me that the fiercest opponents of immigration — in Italy and the US — were those most deeply rooted in their homes, yet somehow dissatisfied. Their only way of dealing with their own fear of change, it seemed, was to hate those who had overcome it.