Faking it with glee 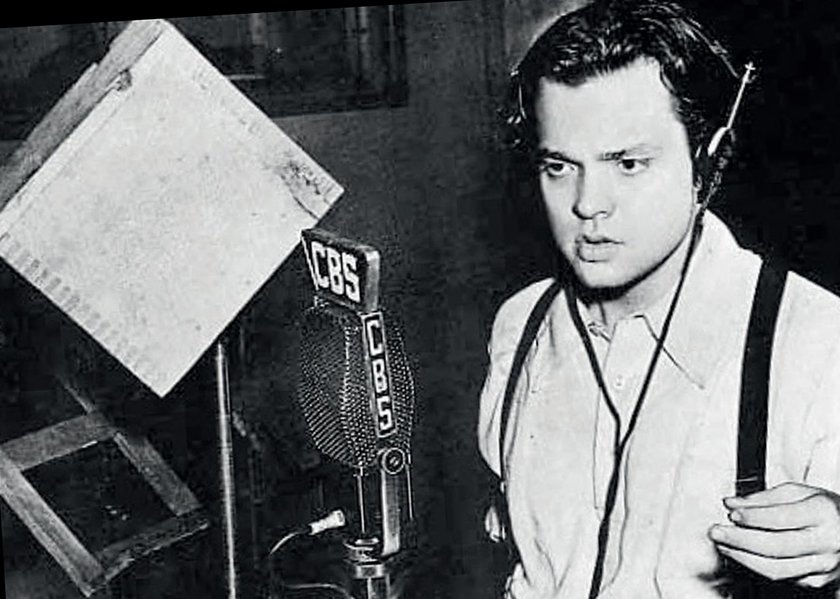 In 1938, actor Orson Welles read a radio play based on "War of the Worlds," and froze the nation in dread.
T

he spreading of manipulated information has been a constant throughout most of human history. Now, however, in the social media era, it appears to have reached its zenith. Consciously or otherwise, anyone who possesses a PC, tablet, or smartphone can swell the already swollen web with their views on any event. Every aspect of cultural, political, religious, or scientific life is available for scrutiny and comment. And most of those who comment are either convinced what they’re saying is true or know it is not but seek to influence and mislead.

In the past, the dissemination of false or wayward information found fertile ground in that checking facts was slow, tedious, and difficult. Today, the fooling of people is helped along by lazy thinking and a reluctance to apply critical judgment. The empowering allure of “sharing” allows for what French novelist André Gide once called “les faux-monnayeurs,” and these counterfeiters can run amok. 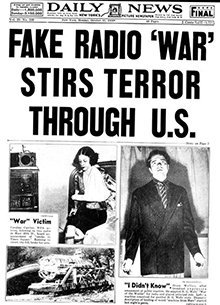 No escape from invading Martians…

Unlike the pre-electric past, propagandists can make their points in seconds. The web knows no borders and news, true or false, travels unchecked at the speed of light.

Egyptian Pharaoh Ramses the Great (13thenturyBC) may have pioneered the idea of domestic propaganda during a drawn-out war with the Hittite Empire. He commanded that sculpted “selfies” of his heroic smiting of enemies be carved into temples. Roman warrior Octavian (first century BC) orchestrated a misinformation campaign to discredit his rival Mark Anthony, producing outrage and eventually a civil war.

Two centuries later, early Christians were said to indulge in incest and cannibalism to discourage potential converts. These vilified Christians, through apologist Lactantius, struck back with tales depicting the pagan Empire as immoral, brutal, and vengeful.

In World War I, anti-German propaganda included mention of a gruesome (but fictional) Corpse Factory in which the bodies of dead soldiers were allegedly dismembered, their body fat extracted to make nitroglycerine.

In a 1938 radio broadcast, actor Orson Welles’s vivid recreation of H.G. Wells’s “War of the Worlds” triggered mass hysteria as some listeners believed a Martian invasion was in fact under way.

“Operation Mincemeat,” a brilliant con carried out in 1943, successfully persuaded even Hitler that the Allied planned to invade Greece, not Sicily. More recent hoaxes include labeling vaccines as noxious, if not lethal. Some insist the Apollo 11 moon landing of 1969 (and all that followed) never happened. The same kind of thinking applies to the destruction of the Twin Towers, with self-styled “researchers” insisting the attack by Islamic extremists was really an American plot.

Ramses commanded that sculpted “selfies” of his heroic smiting of enemies be carved into temples.

Not even Pope Francis is unscathed. Phony narratives suggest his unflinching support for the rights of the poor show he’s a communist. His “outrageous” suggestion that the rich should help the downtrodden (why on earth should a pope preach the Gospel?), not to mention his respect for the ancestral rites of indigenous Amazonian peoples, are seen as evidence of apostasy. And this is just the short list.

In Italy, the manufacturing of counterfeit news rivals football as the country’s national sport. Early this year, a long-planned NATO drill that included U.S. Marines was labeled by some as a kamikaze “invasion” whose goal was to spread the coronavirus throughout Europe. At the moment, the virus is at the core of what Italians call dietrologia, an obsessive search for bogeymen and conspiracy theories. Could Bill Gates, who is investing hundreds of millions of dollars to find a vaccine, have manufactured the virus so he could be the first to offer a vaccine, selling it at his price and earning billions? Never mind that he’s already donated half of his net worth (dozens and dozens of billions) to fight global famine and disease.

But it is in the Italian political arena where counterfeiting has reached surreal heights, especially during election campaigns. Party militants, with or without approval of leadership figures, have made personal smears and character assassination into a commonplace. During the 2018 national election campaign, the angriest fringes of the Five Star Movement (M5S) literally flooded the web with posts that distorted what rival politicians and parties had to say, taking whole sentences out of context and extrapolating sinister implications. Stories of scandal, corruption, and nepotism were circulated, many of which were simply made up. But several dailies took the bait, rarely bothering to check anything, and front pages were filled with tall tales.

This radicalism was toned down after the M5S won the election with 33 percent and formed a coalition government with the right-wing Northern League and its ranting chief, Matteo Salvini.

Salvini, a populist who won an unexpected 17 percent, became interior minister, among the country’s most powerful positions. He created a movement (“La Bestia”, the beast) dedicated to swamping the web with lies so absurd they’d be mentioned in public debate.

He said migrants were not only stealing jobs from Italians but living it up, at taxpayer expense, in five-star hotels. He claimed they were out to Islamize the continent on behalf of the ISIS Caliphate. These were only the tip of the iceberg.

But spreading lies can also backfire. While the M5S has earned applause for paying attention to social issues, it had a rocky start. After its election triumph came months of heated impasse. Unable to team up with the center-left Democratic Party (PD), whose then-leader, Matteo Renzi, it had repeatedly vilified online, M5S leader Luigi Di Maio had no choice but to team up with xenophobe Salvini, who insisted on obtaining the interior minister post.

That pact with the devil produced a major drop in M5S poll ratings. The movement, itself a creation of the web, lost both leftist supporters and zealots, the latter furious that the party had violated a central promise, to govern alone or not govern at all.

Stories of scandal, corruption, and nepotism were circulated, many of which were simply made up.

In the summer of 2019, when Salvini was photographed at a Rimini beach party sipping a mojito and looking a bit in his cups, all began coming apart. Thanks in part to his relentless propaganda efforts, Salvini’s Northern League had overtaken the M5S as Italy’s most popular party. He decided to ask Parliament for a vote of no confidence on the government and for new elections, hoping to cash in on his new acclaim.

Prime Minister Giuseppe Conte finally rebuked Salvini openly, and stepped down. The M5S swiftly moved leftward, discarding the Northern League and making a deal with PD and the tiny leftist Free & Equal Party (Liberi & Uguali). All at once the M5S was in a government with the party it had most slandered during the 2018 campaign.

Conte returned to lead a new government, but the M5S showed few signs of regaining the wide public support it enjoyed in 2018. Salvini’s popularity also began waning, and his propaganda machine less commented on.

This goes to show hoaxing can’t last forever. People eventually do open their eyes, or some of them do. Could all this be a lesson to Italian politicians and voters? I’m sadly doubtful.

When I was a boy, people rationalized any skepticism about the news by saying they’d heard it on the radio or on TV. It must be true. Only too late did they discover that it wasn’t necessarily true. Italians rarely learn from history, let alone from personal experience.

Better and smarter teaching might help, as would a more well-rounded education. At the very least, this new digital generation knows enough about the web to turn it on end. Many know not to take “news” at face value. Many have also started applying the internet skills and tools they have to identify and call out counterfeiters. With persistence and a little luck, they’ll eventually herd them back to into the dungeon from which they came.