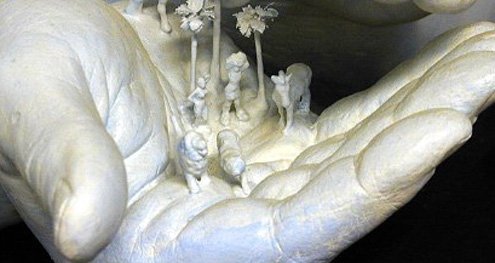 Faith doesn't necessarily have to be called God.
W

e have just had a bit a bit of wet and chilly weather in Le Marche, not at all unusual at this time of year. So it came as a surprise when we saw that someone had erected a tent in a nearby valley.

We soon discovered that the tent belonged to an adventurous Austrian couple that had eschewed the trappings of the modern world to hike around Italy. They carried two rucksacks and made the tent their base camp. When bad weather hit the north, they trekked southward, seeking shelter wherever they could. They stayed for a few days and picked olives in return for food and roof over their heads. They had strong religious beliefs and explained they believed shelter would turn up whenever needed, and so far their faith had been rewarded. They led a life rich in experience and variety and seemed as content as two people can be.

The couple reminded me of a period in my life when my five children were very small and we ran out of money, quite literally. One day I stood outside the school waiting to pick them up wondering what on earth to do. I had enough petrol to get home but not to get them to school the next day. I also had very little food. The world felt like a very bleak place indeed.

This is when a woman I barely knew came up to me and put a €50 bill in my hand and walked off. That was only one example of many acts of kindness, small miracles, in fact, that helped us through those worst of times. For example, my daughter’s need for shoes happened to coincide with someone giving me a bag of clothes that contained a pair of just the right size. A winter coat appeared just as the snows came. My favorite example was when a neighboring mother asked me to contribute to a fund to buy a present for the local schoolteacher. I couldn’t tell her I didn’t have any money. It was too small a sum. Instead, I said I had no change and would bring the money the next day. The following day I was driving up our track when the nearby shepherd flagged me down and asked me to pick up some groceries, which I duly did. When I tried to give him his change he waved it away. It was exactly the sum I needed for the present.

The arrival of the Austrian couple came at a time when I needed to be reminded of those hard times. I needed stop pondering the future. I needed to recall the role of faith. I may not share in their religious convictions but I do believe that faith doesn’t necessarily have to be called God.