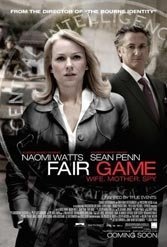 Very Hollywood. Very slick. Very capable. That said, director Doug Liam’s account of the role played by CIA op Valerie Plame (Naomi Watts) and husband Joe Wilson (Sean Penn), a former U.S. ambassador, in the run-up to the Iraq war crowds the scenery and spikes the punch. In late 2001, the CIA, at the behest of Vice President Dick Chaney’s staff, dispatched veteran Wilson to the depressed African state of Niger to check reports that Iraq had acquired “yellow cake,” or enriched uranium. Wilson’s visit minimized the claim (“I’m not feeling very 007ish,” he says after returning). Wrong answer, at least for the Cheney White House. The Niger connection was instead manipulated to into pylon in the weapons of mass destruction propaganda campaign. The Iraq invasion followed months later.

The history of the falsity is now… history. When Wilson rebelled against the deception, Plame bore the VP’s wrath, resulting in an institutional “knife fight.” The film’s strength is its least focused-on ingredient, and it comes too late: The frisson between stressed Wilson and Plame, two smart people attempting to cope first with post-9/11 Washington hysteria and later with post-invasion character assassination. The weak link is the chunk of its mainstream narrative, which necessarily compresses a complex story that retreats to black hats and white hats spewing cliché (Plame: “You have to know why you’re lying and never forget the truth…”).

Liman, the brains behind the first Bourne franchise movie, jump-cuts incessantly to accentuate the fight between the decent, bulldog Wilson and tight-lipped Plame, and the beastly, Scooter Libby (David Andrews) and Karl Rove (Adam LeFevre), the latter portrayed in Watergate-style spirit (with the CIA deputy director describing the White House’s occupants as “the most powerful men in the history of the world.”) Fair enough. But cram enough import into 90 minutes and idealism morphs into parody, another kind of manipulation. Moral of the script-writing story: Political thrillers with a deadweight political message are best when subtle.