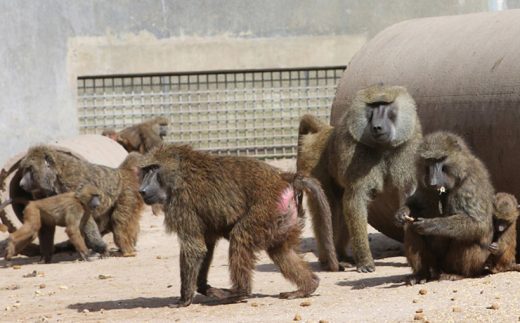 A group of baboons inside the Fort Reno Animal Park operated by the University of Oklahoma as part of its 970s language experiments.
S

omewhere in the boxes I never unpacked when I moved to Oakland 19 years ago there is a postcard. On the front side is a photo of a friendly dog, nose-to-beak with a duck. The caption says, “It’s so nice to be understood.” On the back, the sender wrote, “And so rare!” Signed: Ursula Le Guin.

I had sent her a fan letter. She responded with that card, of which there must be a many others in the hands of other fans. She cannot have had time to respond personally to all her readers’ mail. I treasure my copy nonetheless.

My letter to the American novelist and writer of science fiction, who died earlier this year at 88, was inspired by her piece, written in that sharp, humane voice so sadly missing now. It was a review of Eugene Linden’s “Silent Partners,” published in “The New York Times” of May 25, 1986. “Silent Partners” was Linden’s account of how a group of chimpanzees learned sign language during 1970s experiments at the Institute for Primate Studies in Norman, Oklahoma. Attempts to converse with chimpanzees and gorillas were based on their picking up traditional ASL (American Sign Language).

In her review of the book, Le Guin dug deep only to then dig deeper.

“In the 1970s, when ecology was considered something more than an obstacle to quick profits, experiments on the language capacities of animals were an apt expression of the generous and risk-taking temper of the times…”

But the experiments were controversial, as Le Guin notes, even then:

“That language — genuine language including syntactics, jokes, lies and disinterested or esthetic observation — may prove to be a skill accessible in some degree to several species is an idea so distasteful to some behaviorists and linguists that they attack not only the results of experiments but the investigation of the subject. Academic territorialism plays a part in this tabooing, but the basis of it seems to be a need to believe in the unquestionability of human uniqueness, human supremacy…

“The attitude of the human supremacist is expressed in a vocabulary very close to that of the male supremacist, and both positions probably rise from a terror of losing control of ”nature,” defined as an object of male exploitation. That the animal might exist independently, as a subject capable of cognition, emotion and pain- this perception so threatens some Alpha Males of our species that at any hint of it they go into full aggression display, baring their canines, beating their chests and ignoring the evidence. ”

The DNA of chimpanzees differs from ours by about 1.2 percent. We are more closely related to them than mice are to rats. It is natural to wonder how their minds (assuming we can say they have minds) compare to our own.”

But designing experiments to measure the capacity for language acquisition is complicated. Language is a by-product of relationships, but strict scientific method precludes collusion of experimenter with subject. The impossibility of maintaining strict objectivity was illustrated by the attempt to teach Gillian. “Ordinary discourse, “Linden wrote in his book, “was characterized … by shameless cuing, outright prompting, and dubious interpretations of Gillian’s gnomic, if not unintelligible, utterances. In fact . . . Gillian began to demonstrate most of the behaviors critics have cited as evidence that apes cannot learn language: she interrupted, she repeated phrases incessantly, she responded inappropriately, and she jumbled her word order.”

No separation allowed: Jamis Carter and Lucy in Gabon in 1986.

“Silent Partners” is not only about the termination of the experiments, justifiable or not. It is about the tearing apart of the relationships between people and their simian partners once the funding for the studies was cut off and the project ended. On a small scale, it is about the unhappy consequences of our transactional, exploitative relationship to “nature,” the world of life of which we are just one part. One could point to much larger tragedies, of course.

Rather than abandon Lucy, the chimpanzee she had worked with, Janis Carter abandoned career and human relationships and moved with Lucy to an island in an African river. On the island, Lucy roamed free while Carter lived in a cage and refused to sign with her, hoping to break her dependence on humans.

Roger Fouts’s chimpanzee ally — he had helped group the chimps together —vanished into a maze of laboratories. Lesser-known apes ended up in the care of a lab man, James Mahoney, who said: ”Once you know that money is the determining factor, you know what is going to happen.” Older primates were considered appropriate candidates for “terminal” experiments, including being infected with HIV.

In Mahoney’s lab, depictions of ASL signs and their meanings were posted on the fronts of the cages because the chimps inside signed all the time to their keepers, and the keepers wanted to know how to respond.

Le Guin concludes: “One is left with the unforgettable images of an animal inside a cage, saying, ‘Drink! Food! Hurry!’ to a man outside the cage who doesn’t know the language, and of a woman inside a cage refusing to talk to an animal outside the cage in the only language that animal knows. Such grotesque miseries bespeak a sickness of our times.”

Le Guin lived to see the election of a president of the United States compared to whom any modestly articulate chimpanzee would be a vast improvement.

But she died too soon to witness the unforgettable image of human children torn from the arms of their parents and locked in cages on the orders of this president, amid the cacophony of the triumphant hooting and gibbering of his supporters. Such grotesque miseries provoke the question: who are the “animals” here? And while the president may have rescinded, the the question still stands.