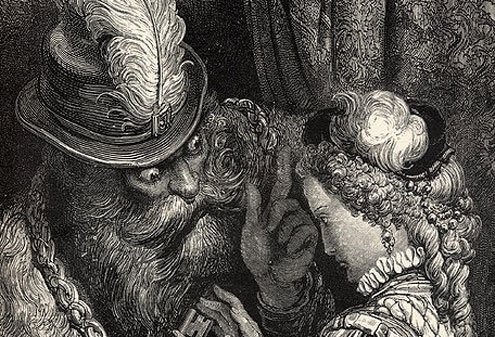 Bluebeard and his wife in a 19th-century illustration by Gustave Doré.
&

#8220;My Mother She Killed Me, My Father He Ate Me” (Penguin) showcases an exhilarating collection of new short stories, all of them enchanted spin-offs of traditional (fairy) tales that have echoed across continents and over centuries.

And, yes, these 40 additions do assume postmodern shapes. But not to worry, they still convey fairyland’s expected magic: talking donkeys, incantations, severed limbs, bewitched territories, and a passel of princes and princesses.

A compiler of fairy tales old and new, collection editor Kate Bernheimer, an American fairy tale author and the founder on the online magazine “Fairy Tale Review,” has included writers who at one time or another in their careers produced a spin-off of a haunting trope that stuck with them.

Some of the featured authors gleaned their inspiration from classic Europeans, including the Brothers Grimm, Charles Perrault, Italo Calvino, and Hans Christian Anderson. Others traveled further afield, finding and embroidering legends from Vietnam, Iceland and Norway. A handful of contributions are translated into English. The variety yields an amazing cornucopia of folk motifs.

Russian writer Ludmilla Petrushevskaya, the author of 15 books, offers the strongly paced “I’m Here,” in which a modern housewife suddenly walks away from her drudgery, leaving behind unmade beds. In the postscript (there’s one after each story), Petrushevskaya describes her narrator as feeling like the protagonist of a fairy tale in which “the hero or heroine sets out on a quest … arrives in a bizarre land … encounters a witch.” The story is from her acclaimed 2009 collection “There Once Lived a Woman who Tried to Kill Her Neighbor’s Baby.”

Bernheimer organizes her fresh shoots according to the original tale’s geography. And authors limit their influence to one source. But additional threads and cast types often bounce around happily within the new story’s epicenter.

A sample: Chris Adrian floats William Butler Yeats’ tale of an arrogantly handsome Irish-village lad to an Orlando, Florida fantasy playground. While borrowing the master’s title: “Teague O’Kane and the Corpse.” In Adrian’s hands, troll-like creatures and talking corpses lead a boy who is “too handsome for his own good” to the gothic terror of a church-become-cemetery, its “floor” colored the bright green of American lawns. Invisible voices moan as the dead pop up from their burial ground beneath the soft artificial turf. Suddenly, the Yeats’ story takes a satiric and menacing edge.

Following her own career CV, which is filled with abused women/bad guys, Joyce Carol Oates predictably chooses the “Bluebeard,” but gives the female role a fascinating new twist.

Ugly Bluebeard, an aristocratic precursor to a modern serial killer, asks his wife: “Will you give up your life for me?”

Which leads her to think: “What is a woman’s life that it cannot be thrown away?”

These spin-offs vary wildly in length, running from three to 33 pages. But most original fairy tales were image-stacked, working at rapid pace and shifting scenes with a fearless indifference to logical transition. Though nearly every story in this volume creates fireworks, length aside, less is generally more.

At over 20 pages “Pleasure Boating in Lituya Bay” by Jim Shepard is a brilliant exception to the short-is-sweet rule. His narrator’s memories of nearly supernatural, cataclysmic disasters in an Alaskan bay are shock pieces to the core. Which suggestively intersect with the episodic disintegration of a happily married couple. Shepard’s inspiration was Calvino’s “Jump into My Sack,” in which a childhood disaster drains the hope from adult life.

Francine Prose‘s long “Hansel and Gretel” take-off, by contrast, is among the few disappointments. Her Grimm-influenced narrative is underwhelming. “All I had to do was transform the brother and sister into a recently and unhappily married couple,” explains Prose. So, unlike H & G, it’s adults rather than children; married, not siblings; unhappy when together. Oh?

Usually, authors commenting on their own work belong to a genre that turns me stone. But most of the reflections here are incisive insights into the chosen tale’s enduring resonance. Fairy tales collapse barriers between the real and the unreal. They often illuminate the humble and everyday. They expose our deepest and everlasting fears and desires.

Though many of Bernheimer’s American authors chose to underline geographic and social particulars, the classic tropes still ring clearly, even in modern dress.

So welcome to this third mil fairy collection! Guaranteed to cast an enchanted spell.