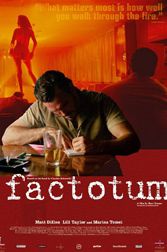 While James Joyce advised “cunning and exile” as the chief attributes of a successful writer, it does not work for every literary lion. Take Charles Bukowski, for example. “Factotum,” Norwegian director Bent Hamer’s black comedy starring Matt Dillon, Lili Taylor and Marisa Tomei, demonstrates that self-discovery often means playing the part of a very public fool.

Bukowski’s alter ego is Henry Chinaski, He’s a character most easily described as a loser, and a drunk. But the very real poverty he lives with provides him with transcendent perception and a truly original voice. Is he likable? In a word, no. But he’s not really a “Factotum” either. He’s got a calling, just not a vocation.

Dillon has taken on quite a few challenging roles in the past, and he takes this turn with his usual “method acting” mastery. Despite his good looks and winning smile, he embraces the role of the dissipated bowery bum with such brio that he’s completely believable. Based on his autobiographical second novel, “Factotum” focuses on Bukowski’s early life when he was drifting from one dead-end Los Angeles job to another. As the character develops, however, we soon realize that this coldly unsentimental movie is about Chinaski’s epiphany, not his salvation.