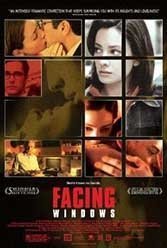 A lovely ambitious wife harassed by life with a working class husband and two unappreciative preteen children expands her horizons after encountering, and (somewhat unwillingly) assisting an aging amnesiac stranger she meets on the street.

The title of Istanbul-born but thoroughly Roman director Ferzan Ozpetek’s 2003 film “La Finestra di Fronte” refers to apartment windows that face each other across a street. The simple narrative, with the amnesiac stranger twist, is set largely in contemporary Rome, but with a backstory that briefly takes viewers to the rastrellamento, or rounding up, of Jews by Nazi troops in Rome on Oct. 16, 1943. The film opens with a wartime murder in a bakery, whose meaning Ozpetek reveals only much later and gradually.

Ozpetek is heavy on melodrama. Giovanna Mezzogiorno is gorgeous as the wife (also named Giovanna), perhaps not-so-long-suffering as her on-screen torment would suggest. The object of her illicit desire in the facing window is too good-looking (think chiseled Christopher Reeves) and her husband is in turn too brutish (think Bruce Willis). The stranger is well-played by Massimo Girotti, a star of 1940s neorealist cinema who died shortly after the film was completed.

His character strains credulity by being too good at what he does – he’s an internationally acclaimed baker, who, alone in old age, somehow produces dozens of spectacular desserts on a single humid day. As for Giovanna, can anyone really believe that a Rome adult would be as ignorant of the events of Oct. 16, 1943 as she appears to be? Had Ozpetek ended the film about two scenes short of when he did, he would have spared moviegoers some thickly applied and pious voice-overs. Still, the film pleased both crowds and juries, winning 27 international awards.

But “Facing Windows” is no “Rear Window,” the 1954 Hitchcock classic in which a cerebral Jimmy Stewart, far from giving into passion, keeps an elegant and seductive Grace Kelly at arm’s length in order to investigate a possible crime. A better first taste of Ozpetek, though also melodramatic, is 2001’s “Le Fate Ignorante” (titled “His Secret Life” in English), which gets an exceptional performance from Margherita Buy.