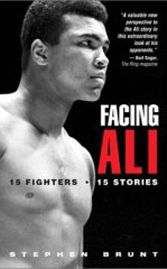 The story of The Greatest has been told again and again. Ali was almost as great a self-promoter as he was a boxer. So Canadian sports writer Brunt cleverly creates a portrait of the man and the athlete obliquely. He traces the career of the champion by telling the tales of the men who squared off with him in the ring (including George Chuvalo, Chuck Wepner, George Frazier). The result is more than biography. It demonstrates how this most brutal of sport has been dominated by mostly complicated, graceful men.