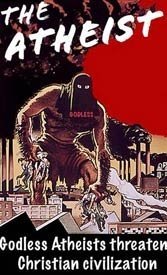 Being an atheist doesn't charm everyone.
I

recently started a group called Atheists Assisi on Facebook, that notorious maker and breaker of contemporary friendships. The group — the first and only one to my knowledge — is devoted to forging a community of atheists in the Assisi area. As one member jokingly put it, “In the land of St. Francis are you sure they won’t burn us as heretics?”

Believe it or not, the first problems I encountered weren’t from vigilante Franciscan monks but from well-meaning expats like myself. When I posted a link to my page on a popular expat group on Facebook, I was considerate enough to tag it “for anyone who might be interested.”

Of course that didn’t stop a minor deluge of comments along the lines of, “Please refrain from preaching, moralizing or ridiculing others’ beliefs” and “I was brought up to respect other people’s beliefs” and “Talking about religion only destroys friendships.” At one point I was even compared to the Seventh Day Adventists.

Thankfully, a few had my back. My critics were reminded that I wasn’t proselytizing or poking fun at others’ beliefs. In fact, all I had done was post a link that contained the word “atheist.” Apparently, that was enough to start the machine gurgling and sputtering. You’d have thought I’d announced the successful cloning of Torquemada and the reconstitution of the Spanish Inquisition.

The idea lurking behind these disputes is that atheists — at least those of us who make a point of talking about it openly — are a kind of militant faction roughly comparable to Al Qaeda. We fanatically harangue passersby about their beliefs, insult them, beat them, spit on their prophets and leave them to suffer from internal bleeding before an oncoming rig — all the while laughing our heads off at their credulousness. We’re a callous bunch, aren’t we?

The truth is that most atheists, even the angriest and most militant, bear no resemblance to the caricature. Most of us are animated by a love of logical argument and a desire for evidence in support of claims. We love to talk, discuss, provoke but also listen and attempt to understand why others feel as they do. We don’t generally carry explosives. We don’t overpopulate prisons. A quote that represents our position might be, “Extraordinary claims require extraordinary evidence.”

It’s a pity I feel the need to write a paragraph like the one above. It’s disheartening that atheists remain the target of hostility, not only from true believers but also from decent people who claim tolerance for everyone – except atheists.

In fact, the one piece of advice my critics had for me was, “Just shut the hell up. You’re ruining the party for the rest of us.” What we were discussing wasn’t religion or atheism, though. It was the right to discuss religion and atheism. I had been accused of parachuting my beliefs behind the wall erected to shield them from inquiry, a wall behind which they can never be questioned, ridiculed or challenged.

But what good are belief systems that go unquestioned? What good is it to carry beliefs in your head that never see the light of day? How do you even know you believe something if you’ve never inspected it sufficiently to see what it’s actually made of?

It seems to me about the worst decision one can make is to insulate cherished beliefs and make them inaccessible to inquiry. It also suggests that such beliefs can’t stand up to even superficial scrutiny. Hence the fear of discussing them openly and the desire to censor those who would.

This is a recipe for disaster. There’s no better way of weeding out bad ideas than letting them get some fresh air. I for one am content to let others question my most strongly-held beliefs for the following reasons:

If you look at societies that ban free inquiry and doubt you’ll find them all to be oppressive if not downright totalitarian. Toleration of free speech and free thought is the essence of a free society. The paradox is that some use the right to try to shut up those whose speech they disagree with.

I’m not implying that’s what was being done in my Facebook episode. I don’t think there was an actual desire to tamper with my right to free speech. What I think happened was that a few people overreacted to a word they dislike, one that challenges their beliefs without their needing to put on armor or pick up a sword. They instead imagined the battle as it might have been: the besieged castle, the hot oil, and the fleeing king galloping through the woods naked.

And that was enough for them. Because the king is naked, and the only person who will remind you of that is the pesky little atheist on your Facebook page.