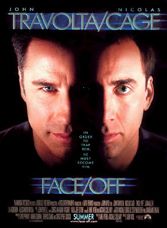 Made when John Woo was still kung fu fresh, here’s an ID card movie with a twist. Good guy Sean Archer (Nicholas Cage) has chased very, very bad guy Castor Troy (John Travolta) for years (Troy caused the death of Sean’s son). Sean finally nails Troy only to discover the now-comatose villain has hatched a bomb plot. Sean decides on a face transplant (using sleeping Troy’s face) so he can get weasel info from Troy’s imprisoned brother, Pollux. When Troy wakes, faceless, guess whose mug he gets stitched on? Lurid transplantation aside, Woo is onto something (so was mythological Leda, who bore twin sons Castor and Pollux…)

Both Cage and Travolta make hay from the role reversals. Let loose with reflecting mirrors, they won’t stop for the fun of it all. Travolta has never been so mean, Cage never so beleaguered — or is it the other way round? Identity games are old hat for Hollywood veterans, but this is more along the lines of identity parody. Mayhem is a constant for Woo; he loves it. But the script can’t resist laughing at itself. “Seeing that face on you,” says Pollux to Archer-Troy, “makes me afraid my tiramisù might come back up…” As if carnage weren’t enough.