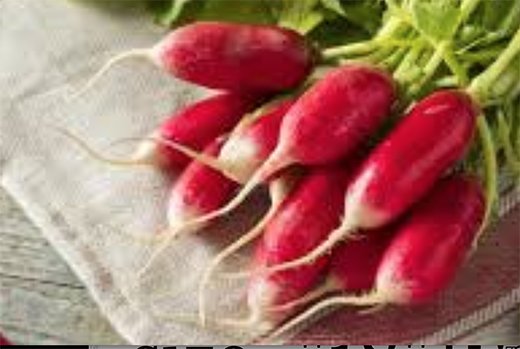 Out of "nowhere," radish heaven.
E

very year about this time, I look out into my garden and marvel at the myriad fava beans (broad beans to some) that hang like ornaments from their sturdy vines. They seem to consume the entire garden landscape.

April had been a slow month. I’d become skeptical about any growth at all until the beans took off — after which came another surprise.

But let me first spend a few words on the fave.

Every year, following the advice of my garden-guru neighbor, I plant during the waning moon — which casts fewer spells, or so he says.  No later than October I erect my sturdy cane teepees and dutifully seed my dried fava beans three to a hole (for company) at the base of each stake.

And every year, my diligence ignored, the strong local wind, the tramontane, knocks over a few — even when they’re seemingly well supported by carefully placed raffia ropes.

But there’s a story within this story.

Some years ago, graced with baskets of beans, we invited an old friend, a sushi chef, to dine with us. Along with steaks of rare seared tuna, I created a fairly large pyramid of beautiful green “wasabi,” much like that served in most sushi bars. Our guest, when told what it was, was visibly horrified at being served what he saw as a baseball-sized, sinus-clearing condiment. In a social setting, the polite thing to do is finish the host’s plate, no?

But in mid- March, red heads of something caught my eye. In recent weeks I’ve pulled up what seem like a trillion two-inch long French radishes.

But after a few minutes of unsettled looks, the visiting chef became aware that the dish before him was in reality a purée of fava beans and potato. What a relief! He wouldn’t have to lose face and heaven knows what else by consuming a heap of that formidable root.

As this little anecdote suggests, fave can be fun.

That said, I can’t take credit for my garden crops. After all, I just plant seeds into eager, nourished earth, and lo and behold, they grow. I’m lazy. I do nothing but cover my garden in a thick layer of something called chanvre de paille, a lightweight and very effective mulch made from (get this) hemp. I’ve been doing this for 15 years. In place of weeds, I get about half a meter of rich black soil. No wonder the seeds eventually wake up.

In January, with faith in Mother Nature (and confident the earth under the hemp layer was alive with worms), I literally walked away from playing gardener. I threw away the two full packets of lettuce and radish seeds I’d intended to plant. I tossed a bit of cover dirt and replaced the mulch. After which I put the garden out of my mind.

In mid-March, red heads of something caught my eye. In recent weeks I’ve pulled up what seem like a trillion two-inch long French radishes. They’re as sweet as they can be and ready to munch on with a little salt and cold butter. Heaven!

They are also a treat when sliced very thinly enough to fill a couple of cups, then doused with half a cup of rice wine vinegar and two teaspoons of sugar. Oh, and a pinch of salt. Marinate in the fridge for an hour or so and serve with drinks.

And if spring laziness makes the idea of planting into a chore, improvise.

Ruffle up the beds, buy some veggie and flower packets, and (after the full moon, of course) empty the lot of it in your garden, while doing your own version of a seed samba.

If nothing sprouts, you can always sit back, relax, and roll yourself a joint with the mulch.