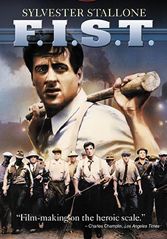 A curious relic that suggests Sylvester Stallone might have been a more interesting as a governor than a boxer. In Norman Jewison’s union saga, he’s Johnny Kovak, a 1930s contrarian who’s morally adroit and earnest by nature. He disdains the rule of bosses and is hailed as a hero by fellow Teamsters who elect him to the presidency of the Federation of Interstate Truckers (F.I.S.T.). Liberal proselytizing aside (Jewison made the groundbreaking “In the Heat of the Night”),

Stallone shows of the winning side of his visceral acting. He’s an effective blue-collar leader, a trucker Rocky. The movie is raw, unfettered by conformity, and stirring early on. But power and sloth corrupt the script, and once Kovak goes big-time, the plot and the writing collapse. It’s still a Stallone classic.