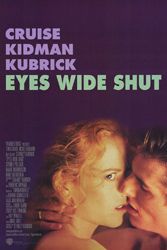 Stanley Kubrick’s eleventh-hour finale (he died before its 1999 release) smacks of “Barry Lyndon” in the way light is drained of life, and life of blood. New York City doctor Bill Harford (Tom Cruise), married and straight, is tossed into 30-something sexual turmoil at a Christmas party. At the same party, wife Alice (Nicole Kidman) is flirted with, provoking husband-wife confrontation that ends, as Joyce would like it, in marital epiphany. Harford storms from the apartment into the storm, literally, but heads allegorically into lust’s waiting way.

For all the fuss, this is a movie about temptation and choices with an oddly puritanical undertow. Harford eventually get snarled up in a wealthy sex society whose membership would seem to include Satan. Kubrick liked the Freudian layers peeled by Viennese writer Arthur Schnitzler. The move is based on “Dream Story,” a Schnitzler set piece that reflects Weimar decadence.

But that decadence, at least in part, arose from a war that killed millions of virile young men. Cruise and Kidman are too picture-perfect to be anything but prettified emissaries; they don’t sweat. Also, Cruise’s Harford — whose dream-nightmare this is — seems more confused than accessible.

Visually, the darkly magical Kubrick maps out a beautiful last dance. Otherwise, this is a portentous film that, while well-worth seeing particularly among Kubrick devotees, champions infliction and reflection without giving you much reason to care.