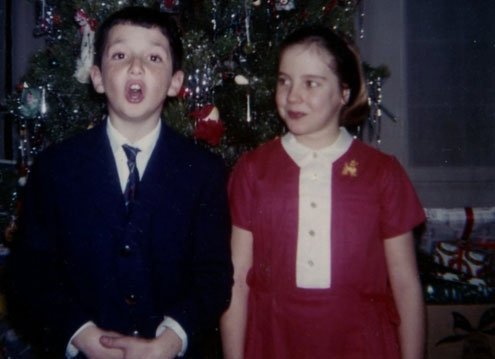 he girl that got away lived around the block. This was a long time ago, which is to say well before Greece got in trouble with the European Union. There was in fact no European Union, in its stead a coin called the Drachma and unassuming king-in-waiting named Constantine.

I knew about the king through a coin and stamp that my father had given me. I showed them to the girl that got away but she was unimpressed and continued staring longingly at her poster of Paul McCartney, which may explain why she got away.

I had forgotten about the girl that got away until I found a brittle photograph concealed inside a 19th-century ceramic vase with four leaping blue rabbits that was once my mother’s. How it got there I’ll never know.

The girl that got away had a pretty face and a lawyer father who spoke like Gregory Peck in “To Kill a Mockingbird” and had defended the Army against Joe McCarthy. Her mother befriended mine and they took walks together in the nearby park. Both were ancient, at least 40. My father was 70 and most called him my grandfather.

When I first told my father I felt something about the girl that got away he told me that boys eventually became men. That was that.

Girls who liked The Beatles were distracted under the best of circumstances. I went to the opening of the movie “A Hard Day’s Night” and heard only screaming. The girl that caught away had explained all this to me and decided I didn’t “get it” and insisted should try harder.

Paul’s beautiful, she told me imploringly. Can’t you see? She then played “I Should Have Known Better” on the record player with the robot arm. The arm mesmerized me while she listened to the song, seeming to suggest a cosmic difference between boys and girls.

I’d meet the girl that got away in the late afternoon, when I got back from our respective schools. We’d run around the neighborhood and hide behind cars and then pet her dog. We’d talked about the strangeness of parents and how we wanted to drive cars.

Our early meetings came before The Beatles and Paul. The Christmas before him was 1962, and we had a party where we sang carols. I wore a little suit. She wore a red dress. My mother took photographs.

After the party I had a strange wish to hold her hand, but I put it aside as silly. I tried to explain it to my father, who launched into a history of psychoanalysis that included people called ego and id but contained no mention of the girl who got away.

But wanting to hold her hand continued, particularly when our palms caressed the chunky fluff of her dog Mattie. I got shivers.

Not long after came “I Want to Hold Your Hand” of another sort, and the girl that got away drifted into Paul-world. Soon, all was about Paul, who was soon followed by another boy, two years older than me, a classmate. He began coming to her house and she’d scowl me away.

I missed her and I hated the other boy. After school, I’d walk alone with my new transistor radio, or ride my bike downhill at high speeds (40 mph, read the speedometer). I tried hard to forget the girl that got away, but I couldn’t. Until one day while riding my bike I saw her holding hands with the new boy. We were 13.

I went home after that, took out the stamp with the picture of Constantine, and lit it on fire. The match burned out too quickly and singed my finger. I cursed out loud.

Soon I found an even better bike speedometer and forgot about the girl that got away, though it would take years before I felt that way about anyone else, by which time my mother had left and my father had died.

I would later remember my first kiss, at 16, but always wondered about the time before it. Instead, I remembered only ego and id and a father like a grandfather who told amazing stories. Until a generation later I stuck my hand into a ceramic vase with four leaping rabbits.