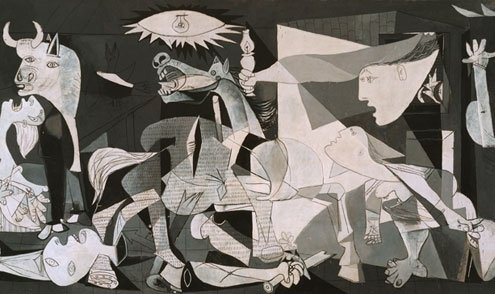 Picasso's "Guernica" was an artistic admonishment against fascism.
I

n a masterfully argued essay published in May by The New Republic, political scientist Robert Kagan argues that the United States may be inviting woe by choosing to forgo the responsibilities of global policing it created in the wake of World War II.

For Kagan, America’s growing desire to be a “more normal kind of nation,” more parochial and less idealistic, may soon bring it to harm as Russia and China seek to outwit a superpower that has apparently forsaken intervention as a way to protect the liberal world order.

Kagan’s assessment focuses on a retreat into “irresponsible innocence,” a phrase first coined by Reinhold Neibuhr. America’s “constant and pervasive forward involvement in the affairs of the world” is being undone by weariness in the wake of terrorism and war and marked a “desire to shed burdens.” By reining in its take-charge approach, “America has perhaps returned to the mood of the 1920s,” when business nationalism predominated. What, Kagan wonders rhetorically, will the world “as is” really be like if America entirely abandons its “abnormal and unusual role of preserver and defender of a liberal world order.” World disorder is the reply, with Ukraine and Syria and Iran as kryptonite in the making.

But what are the moving parts of this early century unburdening? In what way, for example, has digital life unconsciously fortified Neibuhr’s “irresponsible innocence” by placing the pursuit of happiness at the impatient and combative heart of all debate (whether the fight regards sexual orientation, ethnic pride, environmental responsibility or just staying healthy)? What role has the proliferation of online choice played in watering down the narrow but intense idealism that once sustained both Manifest Destiny and the (selective) championing of democratic causes? With all manner of indirect but self-centered communication on the rise, just where does informed international concern fit in? In studying America’s evolution from idealism to enlightened self-interest to Kagan’s sense of the burden-shedding present, is it not also necessary weigh the possibility that we might be the backhanded architects of our own hold-button aloofness.

Americans are world-weary to be sure, but they’re also profoundly in the thrall of culture of metrics and measurement, of instantaneity and instant solution, which while helpful on a daily basis tends to make “right-wrong” a personal matter. Dependence on “smart usage” has distanced Americans from idealistically thinking since idealism is intuitive and nearer to collective self-esteem than to the science of artificial intelligence.

Cumulative distraction has grown weed-like since 2001. Communication is passionate but not idealistic. Online presence is cathartic but seemingly without cost (literal payment is deferred). Assisted thinking and communication are bulwarks of a knee-jerk, caricature-dependent realm that revels its own vastness, whether measured in friends or hits, but has little affinity with the personal sacrifice that once gave meaning to hardier commitments (Kagan cites the anti-Fascism that took root slowly but intensely in the 1930s and set aside more gossipy ideology in favor of open resistance, first by small groups and then by U.S. itself.) Today’s barbaric Syrian civil war might once have qualified for American intervention, since it violates most civilized rules of engagement. As it is, crises come and go, largely oversimplified for the length of their mass media duration.

These occurrences are offshoots of technical progress the unknowingly violates a human progression. The smart-tool engineers of the digital age, by using abbreviations and shortcuts to domesticate daily complexities, have at the same time watered down most non-shortcut thinking and thus eroded the potential for formulating moral and intellectual priorities, since, again, both are intuitive and require no home page required.

Contemporary changes in method and convention, education and training, aren’t just a passing introversion or an affect of affluence. They reflect a surge in disembodied participation and social self-absorption unparalleled in human history. Self is the sum not of wild dreams but of dreamed-of preferences — part of the reason why 21st-century spy agencies, in common with their Communist predecessors, pay morbidly close attention to private lives. When online sniping serves as the primary vessel for concerns about Russia’s Vladimir Putin and China’s economic expansionism, external action can seem superfluous (and confusing, as with the Egyptian uprising, which in 2011 saw enthusiasm turn to dismay, neither particularly convincing).

Thus Kagan’s sought-after inspiration stalls. Many of the would-be inspired are put off by political shrillness. Others suffer the proliferation of options like a curse, stunned into anxiety. Still others cling to psychological disorders and anti-depressant remedies as if worlds unto to themselves, which in turn affects the mood of state. Constructive criticism is a tough sell.

Yet popular trends dictate what a country transmits elsewhere, and American “identity and purpose,” which disappoint Kagan, simply can’t be removed from the deficit disorder edginess that now goes with American life, often marring the follow-through of its citizenry.

When President Barack Obama ruefully reflects that “after a decade of war, you know, the United States has limits” — a remark that sets Kagan to worrying about the consequences of such remarks in a world sensitive to American intentions — he’s not only articulating a foreign policy retrenchment but also implicitly acknowledging that the brave new world of 140 characters isn’t sufficient to express let alone uphold can-do internationalism that arose from a profound sense of limitlessness.

What Kagan is onto isn’t so much a retreat from the deeply held American belief, once girded by force, that part of the national purpose was to ensure everyone’s pursuit of happiness, and not just America’s. What he’s stumbled onto instead is the realty of a dyslexic if brilliant America whose bravery is now mostly focused on typing, tapping and browsing options — eyes cast downward to palms — because in a time of monologues little else seems purposeful.