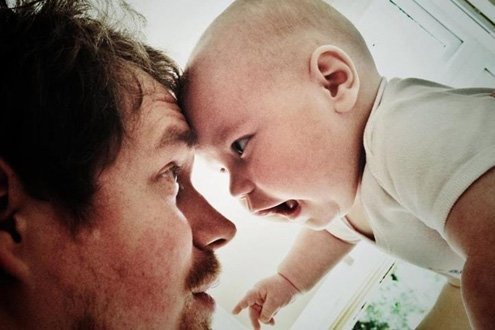 Every gesture and sound is memorized.
M

y second grandchild, a boy, was born last month. I’ve always loved the way a newborn nestles in so effortlessly, warm and soft. The mesmerizing and intoxicating intensity of my grandson’s gaze reminded me of the eerie, knowing way infants make connections with those around them. Researchers who study babies not in relation to themselves but as entities in the world, as objects, sadly miss most of what’s going on. The scientific investigator who sees infant life as a phenomenon of physics or examines a child as a specimen of plant or animal life will fail to absorb the vital essence of basic, early connections.

There are those who insist infants are sponges that do little more than absorb the care of those around them. A baby’s intense perception of — and participation in — early interactions is lost to them.

That’s because a passing look at a squirming infant doesn’t reveal the necessary information. You need to gaze into its eyes.

Compared to other mammals, human babies are born early into their development and thus far more helpless. Scientists have estimated gestation would have lasted18 months had humans not begun walking on two legs, limiting pelvis size. The human head is consequently smaller at birth and only partly developed. What in other mammals is inborn, humans must acquire, including the neural pathways that regulate emotions and states.

If you have the good fortune to cradle an infant, watch how even a newborn tries, with great concentration, to copy your facial expressions. Open your eyes wide, stick out your tongue, make an “O” shape or a flat line with your mouth and you’ll see the infant quickly trying to imitate you. Its facial muscles can already reproduce these movements. All it needs is practice. More important, these copying efforts mean the infant must know it has a mouth and that the mouth can form shapes.

Babies are also keenly attuned to the states of the person caring for them. They peer into the eyes of a caregiver with great concentration. They pick up on emotional states, in interest or lack of it, in ways of looking or not looking. Their nerves are busy growing synapses. Pathways are being formed and solidified — or not being formed. In regularly soothing a crying child, a caregiver is involved in developing the firm pathways to cerebral areas that will later regulate self-soothing. If the infant’s cries go unheeded, these self-soothing pathways fail to develop. If instead the infant receives adverse stimuli (angry faces, loud and alarming noises), different pathways are formed that can make self-soothing impossible. Anxiety and similarly adverse states become the immediate response to any kind of unpleasant stimulus.

If a baby looks into the eyes of an adult and receives a blank stare or none at all, it will record this fact. If the pattern repeats itself, the infant may try hard to engage the emotionless face, only to start sobbing when it fails. (A surefire way to make an infant cry is to stare at it with a blank and unresponsive face). If an emotionless face becomes the norm, the infant may start wailing without even making an effort to engage the caretaker. Worse, it will begin to respond to all faces in the same way. When over-stimulated or under-stimulated, or simply in need of a connection, the infant will choose to shut down.

Problems commonly seen as genetic are often related to this give-and-take, or its absence. The brain develops only in a human context. The quality of the relationships experienced by newborns and young children have a direct effect on what kinds of lasting neural pathways are formed.

Do parents deserve praise or blame for an infant’s deep sense of connectedness or its inability to soothe itself? No more than they do for an infant’s brown eyes or blond hair, or for the nature of the relationships they faced in their own infancy and childhoods.

But if such networks are being formed early on, can the process be undone?

The physical structure of the brain is often perceived as rigid and unchangeable — at least without chemical intervention. In fact it’s no more rigid than any other physical structure. The same way a child’s brain responds to adverse interactions, it can also respond to the positive. Good pathways can be formed, and good relationships can be a key ingredient in forming them. Good relationships are those in which gazes are returned, smiles are acknowledged, and cries soothed.

Pioneering University of Southern California neurologist Antonio Damasio has demonstrated that the brain remains flexible throughout life and can acquire additional pathways through new relationships. Even we oldies, it seems, can keep learning — it just takes us a bit more time. But look us in the eye, like babies, and we’ll understand.