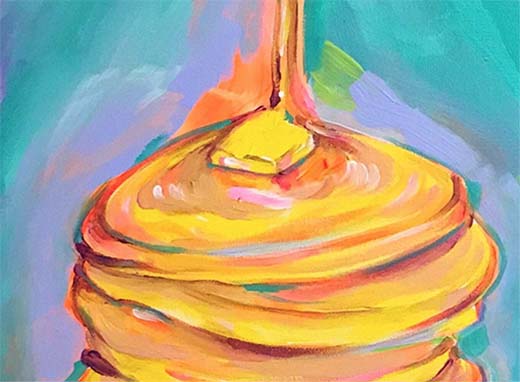 Nothing likes hot expressions from the state of Maple to please a young boy's heart.
W

hen I was five and a half and had just arrived in the United States, I was one morning summarily accused of having risen on the wrong side of the bed.

This jarring j’accuse came from an otherwise upstanding figure, my father, apparently unnerved that I had demanded breakfast pancakes when there were none to be had. My mother spoke little English so she just ignored this momentous claim.

Miffed, I stormed back my bedroom in an attempt to dispel my father’s surely mistaken (if not probably illegal) contention. Though I, too, spoke little English – we had come from Paris – I had clearly understood “rose,” “bed,” and above all “wrong.”

Still in my night armor, pajamas with bunches of smiling yellow giraffes, I carefully examined the bed. It seemed tossed from both sides. In fact, the pillow was on the floor, but on the left side, not its usual right, so maybe there was some right in this charge of wrong. The blue blanket formed a soft pyramid at the foot of the bed and seemed uninterested in my ruffling around, as if determined not to get involved in the controversy (blankets are generally passive). Or perhaps it was still sleeping.

Creases of me crissed and crossed, zigged and zagged, offering not a single clue.

I then examined the sheets for telltale imprints of me, rivulet-like indentations that a true detective might turn to if pressed on the progress of a night, or if he was required to respond to questions of import, such as: “Before the pancakes in question, on what side of the bed did the sweet-toothed youth sleep on?”

But these creases of me crissed and crossed, zigged and zagged, offering not a single clue.

I wanted a thorough geography of my giraffe-clad movements but all they gave me was a hint of great side-to-side migration, as if I’d crossed oceans and rivers (if not the Rubicon itself) but come to rest on both sides of their shores. Whether I’d emerged on the Atlantic or Pacific side of my bed remained unclear.

Whereupon it hit me that no side of the bed could possibly be wrong when it came to demanding pancakes, which I considered my birthright. No matter if I’d risen on the San Francisco and not the Boston side, who dared deny me (and my honorable giraffes) tender cakes and copious quantities of Maple syrup (which came, I knew, from the northern state of Maple)?

Action now took precedence over investigation. So I left my bedroom and bounded back downstairs to tell my father he was wrong, I hadn’t risen on the wrong side of the bed, since only I could determine, with my giraffes, the right locations of my time at rest. And what could be wrong with wanting pancakes?

I explained all this with huge earnestness, going so far as to suggest he lacked the familial rank to deprive me. I was the child supreme.

I then understood everything. These were not pancakes but ‘expressions.’

It was at this moment that I smelled the aroma of pancakes coming from my mother’s tiny kitchen. I was confused.

“That’s an expression,” said my father, as my mother brought in my round delights.

I then understood everything. These were not pancakes but expressions.

It was high time I worked harder to learn English. Maybe the smiling giraffes could help.

This I remember thinking 60 years ago one late summer morning in Washington D.C.

After which, I gobbled up the sweet expressions, and made my bed, hoping all the while that my father might — once I pared away my smiling but sleepy giraffes and I did up my daytime buttons — take me for a ride on the nearby trolley, whose tacks existed until the 1970s, when they were covered over by asphalt to make way for the first of many new worlds I have come to know only in passing, preferring instead to remember my own tales of beds and breakfasts and the serving of expressions, because once those tales are gone, no one will come bounding down the stairs to retrieve them or comfort their wounded pride, let alone write them down to ensure the history of misunderstandings remains rich in folklore.